How Much Money Does Legal Weed Make? 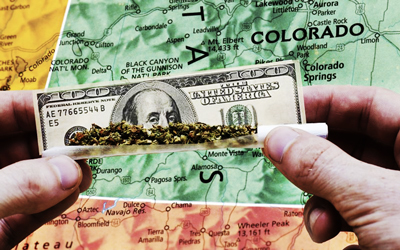 Before Colorado and Washington legalized weed, many promises were made by legalization supporters. Those promises included the fact that the tax revenue generated by marijuana sales would be used for things like schools and hospitals – two areas of major concern across all states. In addition to that, Mason Tvert, one of the directors of the Yes on 64 Campaign at the time, estimated that Colorado would make “tens of millions of dollars” in tax revenue that could be directed towards those hospitals and schools.

After those promises were made, on January 1, 2014, recreational and medical marijuana use was legalized in both Colorado and Washington. So the question now stands. How much has legal marijuana made in both states? And has that money been used for what it promised it would be used for?

With numbers like that, it seems that Colorado’s first prediction was true. Legalizing medical and recreational marijuana did in fact generate tens of millions of dollars; in fact, it surpassed even that. So where did all that money go?

Here Colorado has made good on their promise, too, with every single cent of cannabis tax revenue going towards schools. Every year the first $40 million is directed to a state program known as BEST. BEST gives grants to local school districts to build new schools, and improve the facilities in existing schools. About $3 million over that first $40 million is given to the public school fund, and the remaining sales taxes are left for the state legislature to spend as they see fit, as long as it’s on educational programs or facilities.

Colorado is definitely where the money is at when it comes to the money made from legal weed. What that state made in just one year is just under what Washington has made since marijuana became legal in 2014. Since that time, Washington has seen just over $1 billion in sales of marijuana. From that amount, approximately $250 million was made through taxes for Washington State.

The division of those taxes is a bit more complicated in Washington than it is in Colorado. The tax revenue is distributed to:
• $125,000 to the Department of Social and Health Services to design and administer the Washington state health youth survey, and produce reports based on that survey.
• $50,000 to the Department of Social and Health Services to conduct a cost-benefit evaluation of the industry as a whole.
• $5,000 to the University of Washington for use within its alcohol and drug abuse institute
• $1,250,000 to the Liquor Control Board for the upkeep and administration of marijuana’s regulation.
These amounts are given to these departments and boards every three months.
Of the money that’s left in Washington marijuana tax revenues, it’s divided up by percentages and given to different accounts and programs. Those are:
• 50% goes to the state basic health plan trust account
• 15% goes to the Department of Social and Health Services for marijuana prevention programs
• 10% goes to the Department of Health for marijuana education programs
• 5% goes to the Washington State health care authority to provide primary health and dental care
• 1% goes to University of Washington and Washington State University to study the long-term effects of marijuana use
Clearly, the legalization of marijuana in both Washington and Colorado has done the states, and users within them a lot of good. It’s been said by many that the models these states have used will provide a valid outline for other states and nations that are also considering legalization.

More From News & Law
MOST RECENT
SHARE THIS BLOG
MSNL RELATED ARTICLES
MSNL POPULAR ARTICLES
MSNL 2022 GUIDES.
LEARN FROM LEADING
INDUSTRY PROFESSIONALS.
MSNL have taken the hard work out of finding factual information.
Browse our encyclopedia of Marijuana guides and get straight to the point!
SIGN UP & GET 10% OFF! Sign Up to the MSNL Newsletter to receive exclusive discounts!
20 Years Of Quality and Excellence
The journey to what MSNL is today started as a hobby but quickly turned in to something much bigger. In that time, we have honed our craft and helped customers all over the world to grow their own cannabis.
Our aim is to help you grow the best weed you can,
empowering you with detailed grow guides and resources to make the most of each seed. Read More...
front