Matching Beer and Weed: How To Pick A Perfect Pair 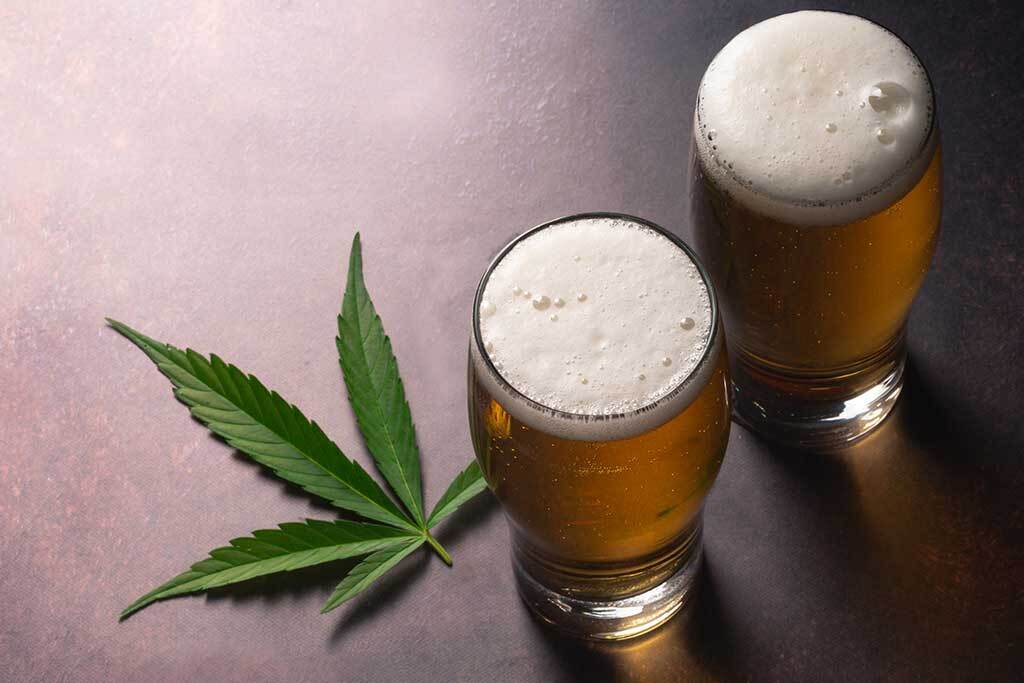 Have you ever cracked open say, a bottle of Beck’s beer, and thought to yourself “Wow, that smells a lot like that weekend in Amsterdam!”? If your answer is yes, then congratulations, you are just like the whole lot of people who notice the correlation between cannabis and hops, arguably the best cousin combination ever.

It should be said, however, that not all beer enthusiasts are cannabis lovers, and vice versa. Nevertheless, there is a lot of overlap between beer and weed and you will find plenty of people who enjoy a nice skunky spliff together with an ice cold brewski (or three), though, not all beer goes well with cannabis and some cannabis strains only pair well with certain types of beer. There’s a lot to discuss in this area, but we’ll attempt to cover the fundamentals to find that perfect pairing for your next buds n’ brews session.

It’s All About The Terps

Coffee and cake, wine and cheese, peas and carrots and now beer and weed. Some things just go together naturally for whatever reason and cannabis and hops are no different, though the two have a lot more in common with each other than the foods mentioned above. Both hops and cannabis produce similar effects in people who consume them, most notably a feeling of euphoria and/or relaxation and are also well-known for their sleep-inducing properties. However, the two share something that goes beyond sleep-inducing relaxation, at least as far as beneficial chemical compounds are concerned, specifically terpenes. Prized by cannabis and beer (as well as wine) enthusiasts alike, these magical compounds produce a synergistic effect that can also combat stress and enhance your mood.

One of the most abundant terpenes found in both plants is myrcene, which apart from helping you get some shut-eye, is a wonderful muscle relaxant and also contains anti-inflammatory properties. Humulene, known for its anti-tumor and anti-bacterial effects, is also common in both plant species as well as beta-caryophyllene, the terpene probably most associated with the skunky-funky weed smell found in both beer and weed. You can refresh your memory on cannabis terpenes here.

If that weren’t enough, a recent sub-species of hops was discovered to contain CBD as well as other cannabinoids and terpenes! This sub-species happens to be native to China and India, which are also thought to be (or at least very close to) the geographic origins of the cannabis plant, leading many researches to think that cross-pollination between the two plants may have occurred, resulting in so many shared chemical features.

Pairing Your Weed With Beer

Just like pairing food and drink, picking the right cannabis strain for your preferred beer style can take a bit of work. Not all beers are alike, nor do they have identical effects, as many beer drinkers will attest. Some are great for day-time drinking as they are light and refreshing, whereas others are enjoyed best in the evening as they can be quite heavy and sedating, ditto for cannabis varieties.

That being said, ideally you want to find a pairing where the flavors, aromas and effects blend well with each other and balance each other out. It’s probably a good idea to avoid both very strong beers (ABV of 6 and above) and very strong strains of cannabis (THC levels over 20%) when combining the two, as this could lead to unpleasant physical effects such as dizziness, headache and nausea and put a premature end to your night. Additionally, you don’t want to overindulge on either and then try to “offset” the effects of one with a strong dose of the other. The idea is to take it slow, savor the flavor and effects of both and let them enhance each other subtly, much like wine with a nice meal.

Nowadays, thanks to the explosion in popularity of craft beer across the globe, there are countless brands and beer styles available. Cannabis is on a similar path with legalization underway in many countries throughout the Western world and the number of different strains on the market is also staggering. As mentioned above, not all pairings will work well, but pairing according to beer styles and particular strains is a good place to start. Below we present our suggestions:

While both types of Pale Ale can be quite bitter and stronger on the alcohol content, American Pale Ale’s tend to have a more balanced malt flavor, though this can vary from brewer to brewer. Having said that a nice, uplifting, pungent and zesty strain such as Sunset Shertbet or Lemon Skunk, or should pair nicely with a bitter yet aromatic IPA whereas the peppery-woody-fruity combination found in Wedding Cake or Girl Scout Cookies should blend nicely with a well-balanced APA.

These beer styles generally tend to have a much different flavor profile than their lighter counterparts and are usually higher in ABV. Roasted barley is what gives these beers their darker colors as well as their chocolatey, coffee-like flavors. A nice piney, citrusy strain such as Jack Herer would pair exquisitely with a fine stout and what goes better with coffee than a desert-inspired variety such as Ice Cream Cake with its creamy vanilla aromas and hints of nuttiness?

These beers are perhaps the most popular style in the world, at least in terms of amounts sold and consumed as they tend to be lower in alcohol, are generally crisp and light and are incredibly refreshing, particularly on a hot summer day. The bitterness can vary depending on the brewer but overall they aren’t overpowering as far as hopiness goes, which means that they can be more broadly used with cannabis varieties that are a little stronger on the nose and palate. Here a nice bottom-fermenting lager would marry beautifully with the world-famous myrcene-heavy OG Kush or Blue Dream, which are both herbal and earthy at the same time. If pilsners are your thing, a fruity, floral Pineapple Kush with notes of chestnut will nicely balance out the mild bitterness of a typical Czech-style Pils.

These two beer styles are considerably different from each other in terms of flavor and body, with wheat ales being quite smooth and creamy, although quite heavy and filling, whereas sour ales are lighter but very aromatic and tart. With its heavy citrusy profile, Sour Diesel would nicely complement either style but also something very sweet and floral such as Blueberry would be a lovely contrast to the tartness of a sour beer but would add a nice fruity punch to a creamy Bavarian-style Weissbier.

Why not cut out the middleman and just brew some beer with weed? Many brewers have already come across that idea with varying degrees of success. To make any style of beer, you need some type of starch for your mash in order to produce alcohol. Most commonly barley malt is used though any starch (potatoes, oats, rice, etc.) will do as long as you aren’t too concerned about violating the German Purity Law (Reinheitsgebot), which mandates you use only water, malt, and hops. In this case hops are used mainly for bitterness and preservation and only occasionally for aroma or as a flavoring agent when you add higher amounts of it, as is the case with IPAs. In this process, cannabis can only be used as a flavoring ingredient as there aren’t enough starches in the flowers and leaves to use for your mash. To do so, you would have to use very large amounts of cannabis, which would also considerably change the flavor profile of your beer, potentially making it undrinkable.

Some brewers (and vintners) in the US and Canada have already started making THC and/or CBD-infused beverages, some of which simply replace the alcohol entirely or mimic the taste of the original with a small canna-kick to them. This is perhaps a topic for a separate article, but in general it defeats the purpose of pairing beer with cannabis as the idea is to combine flavors and aromas that otherwise wouldn’t be enjoyed together, and if you’re the type of person that wants to combine weed with a pumpkin-spice-triple-mocha-Oreo-parmesan-bacon-oatmeal stout, just eat a fancy edible instead. Your tastebuds (and liver) will thank you later.

The flavors and aromas of both cannabis and beer can be endlessly toyed with in many directions, but if combined accordingly they are just as wonderful a marriage as certain types of your favorite food and drink. Of course, moderation is key and sometimes less is more, so remember to keep things simple but a little experimentation can go a long way. So bottoms up and pass the Dutchie ‘pon the left-hand side. Happy pairing!