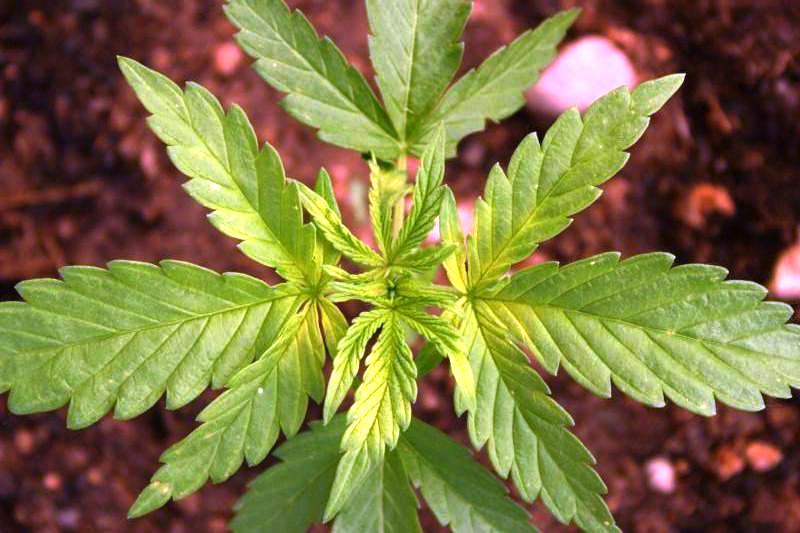 Iron may not be one of the primary nutrients for cannabis, but an iron deficiency will greatly inhibit a plant’s growth. It will first appear as bright yellow leaves. This discoloration is just one of the symptoms of a plant being deficient in iron. It is also just one that mimics other nutrient deficiencies in marijuana plants.

Iron deficiencies are one of the most common problems growers run into. It is for this reason that growers need to know what to look for and how to treat their plants if they suspect an iron deficiency.

Why do marijuana plants need iron?

What are the signs of an iron deficiency in marijuana plants?

Marijuana leaf problems will be the first sign that a plant is suffering from an iron deficiency.

This will start with new leaves that are formed but if left untreated, can spread to older, lower leaves. There is some time before this happens and the deficiency progresses, so plants may still be treated with full recovery once the leaves start to yellow.

When signs of an iron deficiency start to appear, it is important that growers determine the cause of the problem. This is the only way to begin treating it. Excessive amounts of water is one common cause for cannabis plants experiencing a deficiency in iron. This can be because the plant is simply getting watered too often or too much. It can also be because the soil doesn’t have good drainage. This will also cause the water to pool inside the container, which can result in excessive water and marijuana deficiencies.

Like other nutrient deficiencies, an iron deficiency can be caused by a problem with the ph levels in the growing medium. Proper cannabis ph levels will ensure a neutral environment for the plant. If those levels are too high or too low, it will negatively affect the plant.

Marijuana that is grown in coco coir has been found to be particularly susceptible to experiencing a deficiency in iron. This is due to the fact that the medium naturally lacks iron and contains a lot of salt. That salt makes it more difficult for the plant to absorb the iron.

How to fix iron deficiency in marijuana plant

Before any plants are treated for an iron deficiency, the ph level of their grow medium should first be checked. Iron will best be absorbed by the plant’s roots when in a grow medium with a ph level of 6.5.

Anything above 7 and the iron will get locked out. This level should also be lowered to between 5.5 and 6.5 in hydro and coco coir setups.

If the ph level is too high, the system should be flushed with ph-balanced water. This will help return the ph levels to a normal level. Once the system has been flushed, no additional iron needs to be added. While nutrients should be given to the plant, an iron booster is not needed. The only exception to this is when plants have been grown in reverse osmosis water, which will remove nutrients.

After the grow medium has been tested and shown to have proper ph levels, and the normal amount of nutrients has been given, there’s really nothing left for a grower to do for an iron deficiency. Unlike other types of nutrient deficiencies, it is possible for affected marijuana leaves to return as normal, green and healthy. Even leaves that have turned fully yellow have been known to turn back to green after being treated for a deficiency of this nutrient. So growers should not remove leaves that were affected by an iron deficiency. Signs of an iron deficiency should go away in about one week.

Iron may not be a primary nutrient for marijuana plants, but it’s still a very important one. Without it plants can become weak, depleted of leaves, and generally suffer. Growers need to know the signs of this type of deficiency so they can take the necessary steps to treat it and keep it from spreading to the rest of the plant.