Marijuana can do you good in all kinds of ways, as well as improving your physical health and helping you to deal with conditions such as anxiety, stress and depression, the wonders of weed even extend to improving your sex life by having stoned sex.

Dopamine and anandamide are both neurotransmitters which are closely linked with the sensation of pleasure.  Cannabis triggers the release of dopamine and replicates the effect of anandamide, which is known as the “bliss molecule”.  Specifically, it’s the THC in cannabis which creates this “blissed out” feeling.  Of course, sex also gets the hormones going and makes us feel great about ourselves, life, the universe and everything.  So high sex really can be bliss.

Marijuana is great for putting mental issues to bed

You have to be in the mood for sex so any anxiety, stress or depression is bad news for your love life.  Whether it’s high sex or stoned sex, anything which puts you in a better place mentally has got to be good for your performance in bed.

Cannabis is an aphrodisiac

Back in January 2017, a team of researchers looked into the evidence of how high sex or stoned sex compared to sex without the help of weed.  They found that 70% of people reported that they found having high sex or stoned sex improved their sexual performance.  What’s more, men and women reported equal levels of satisfaction with weed as an aphrodisiac.  This study is yet another example of modern science validating ancient wisdom, there’s evidence of marijuana being used as an aphrodisiac going way back throughout history.

Stoned sex may help men to get high

As well as being a general aphrodisiac, cannabis may help with cholesterol-induced erectile dysfunction.  Cholesterol essentially creates a fatty lining in the blood vessels, which has the effect of making them narrower and therefore hinders blood flow around the body including to the penis, which makes it harder for a man to get an erection.  Marijuana dilates blood vessels and so counteracts the impact of the cholesterol, hence improving erectile functionality.  This theory has been backed up by a 2013 study (carried out in mice).

Cannabis also helps to increase blood flow to the vagina.  This sets off a natural chain reaction which ultimately leads to pleasant water leaking or the “wetness” a woman feels when she’s aroused.  This property of marijuana has been noticed by both the medical profession and companies which make products to improve your sex life and has led to the creation of THC-infused lubricants, arguably an interesting new take on the concept of cannabis topicals.  There are plenty of recipes on the net if you fancy making your own.

While testosterone is mainly associated with men and their physical strength and stamina, it actually plays an important role in raising the libido of both men and women.  High sex is fuelled by THC, which is known to boost testosterone levels for approximately half an hour. 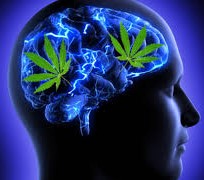 Research suggests that cannabis stimulates the sense of smell, which means that when you have high sex or stoned sex, you will have a whole new appreciation of your partner’s aroma whether that’s perfume, aftershave or just the scent of their bare skin.

As has been mentioned already, marijuana relaxes blood vessels, which causes the pupils in the eye to dilate and this leads to a whole new perception of colour, which can be a very stimulating experience.

All in all, people who’ve tried having marijuana before sex report an vastly increased level of sensory perception in general, possibly because one of the effects of marijuana is to make you focus on the now, which means you take the time to look at what, or in this case, who is right in front of you with a whole new degree of attention.

Even though having stoned sex can be a great experience in many ways, there are a few potential negatives you might want to consider.

Cannabis is great for the blood flow, but it’s notorious for bringing on a feeling of having a mouth full of cotton wool.  This is generally a minor nuisance but may be a bit more of an irritation when you want to get down to some deep kissing.  On the other hand, there’s nothing to stop you sharing the experience of drinking from a bottle of water or sucking on ice cubes while you are in the zone or just waiting until you have finished quenching your passion and then quench your thirst.  You could even up the post-coital experience by offering something other than plain water.  Although you might want to avoid alcohol or fizzy drinks, there are still plenty of other choices from healthy fruit smoothies to less healthy caffeinated beverages.

You may end up with a major attack of the munchies 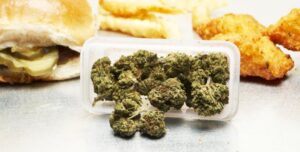 Marijuana is known for stimulating appetite, that’s why it’s often prescribed to people who, for one reason or another, need to be enticed to eat.  Exercise also makes you hungry and sex is arguably the most fun form of exercise there is.  Put the two together and you can get some serious munchies.  If you’re planning a date night with marijuana and sex, you can have some filling snacks ready for afterwards.  Alternatively, you can make a point of always being prepared for something spontaneous by keeping plenty of long-life snacks in your kitchen cupboards.  Tortilla chips are the classic way of satisfying the munchies, but there are lots of other options.  The key point is that you should just be able to open a container and get munching.

If you’re using oral contraceptive or a “set and forget” option like contraceptive implants, you should be fine for having sex with your regular partner.  If you’re relying on condoms, either as contraceptive or for safety with new partners, then you may want to think twice about using marijuana before sex.