Bongs and Bowls: How to Pack a Bowl of Weed 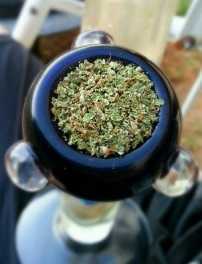 To ‘pack a bowl’ means to pack weed into the bowl of a pipe or bong before smoking it. So, how do you do it? A bong is a device used for smoking cannabis. The marijuana is placed into a bowl before it’s lit. As you inhale, the smoke is drawn through water and makes a gurgling sound. As you continue to inhale, the interior of the bong fills up with smoke, which you then also inhale.

A bong is comprised of many parts, and they are all important. The bowl is where you will pack your cannabis strains. Part of the bowl is also the downstem. This stem is angled and provides a passageway from the bowl to the chamber. This is the part of the bong that holds the water. Located on the chamber, usually across from where the bowl sits, is the carb. The carb is designed to sit above the water. It allows you to control airflow.

There is one other part of the chamber. This is the long piece that extends up above the water. At the top of the chamber is the mouthpiece. As its name suggests, this is where you place your mouth to inhale the smoke coming up the chamber.

How to Pack a Bowl of Weed Like a Pro

It’s not that difficult to pack a bowl. People do this even after already smoking a few, which tells you it’s fairly easy. However, by following certain steps, you can pack a bowl like a pro, and enjoy it even more.

1.) Remove the empty bowl from the bong. You can pack a bowl of weed with the bowl still in the bong, but there are risks to this. Firstly, you could accidentally knock the bong over while you’re packing it. You could also lose bud into the water chamber. If any of your weed does end up in the downstem, keeping it out of the bong will allow you to easily remove it.

2.) At this point if you would like, you can place a screen into the bowl. If you use a glass screen, gently drop it in and it will fit into the bottom of the bowl nicely. If you’re using a metal screen you can push it into the bottom and mold it with your thumb or finger. This is difficult to do though, when the bowl is brand new, clean, and very smooth.

3.) If you’re not using a screen, there’s no reason to despair. Break off a piece of bud that’s slightly larger than the bottom of the bowl. This will act as a screen for you and ensure you don’t lose your weed as soon as you pack a bowl. Make sure the bottom pieces are not too big, as that can prevent proper airflow, and make the bowl more difficult to smoke.

4.) Remove seeds and stems from your bud if they have them. Then, pinch smaller pieces on top of the larger piece. You can use a grinder for this job. However, leaving them a bit bigger can provide better airflow, and a better smoke. 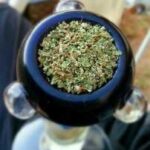 5.) Once you have a nice mound of herb in your bowl, use your thumb to gently press it down. Generally speaking, you should pack a bowl this way until it’s just below the rim of the bowl, or even with it. You don’t want to pack a bowl too tightly, as that will prevent air from flowing through it. However, you don’t want to have a very small bowl either, as that can prevent it from burning properly.

6.) Gently ease the downstem back into the its setting until the bowl is once again sitting comfortably outside the chamber. Then just get comfortable!

How to Smoke a Bong

Of course, knowing how to pack a bowl does you no good if you don’t know how to use the bong afterwards. Bongs can be intimidating to those that have never used them before. Fortunately, this is also very easy.

1.) Before you start smoking your bong, you should fill the bottom of the chamber with some water. You need enough to submerge the stem, but not so much that it spills out of the carb, or where the bowl sits. If you want to get really creative, you can fill the chamber with something more flavorful, such as pineapple juice.

2.) Next, pack a bowl as described in the steps above.

3.) Start smoking by lighting the bowl without inhaling any smoke. Place your entire mouth, or as much of your lips as possible, inside the bong. Do not put your mouth around the bong. This is not only incorrect, but it will also make you look very silly. Once your mouth is inside, you can start inhaling. If the bowl cherries, meaning the water begins bubbling, you have done it correctly. 5.) Hold the smoke in your lungs for about three seconds, if you can. Continue smoking if there is more in the bowl and you’d like to. Otherwise, know your limits and enjoy the experience!

Anyone can pack a bowl and enjoy a good bong rip. However, when you know how to do it like a pro, you’ll enjoy that bowl so much more. You’ll also impress your friends when you handle your bong with expertise. So, go on, get familiar with your new device, and get ready for many more sessions to come.