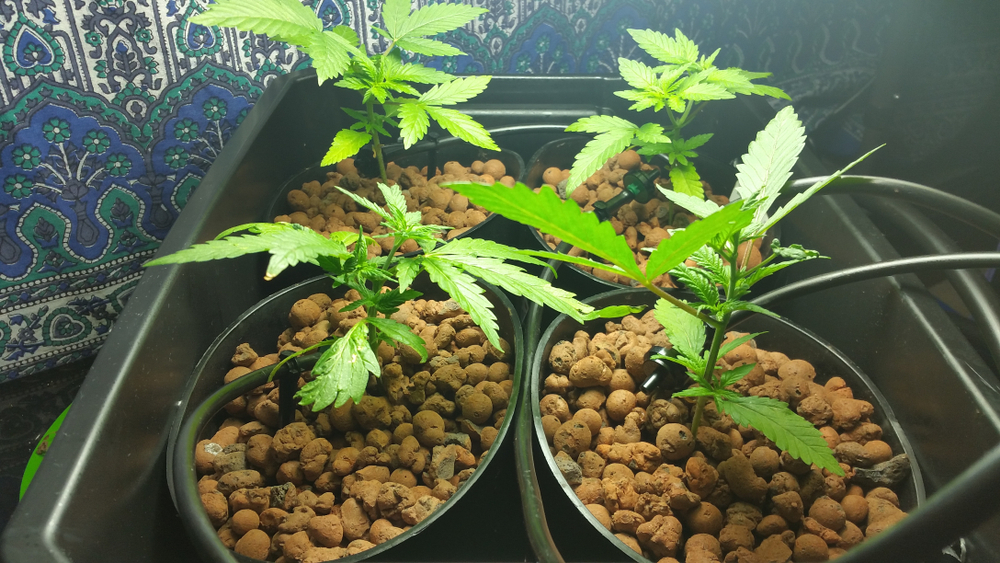 So you’ve decided you want to grow some fine cannabis but you might be a little confused with all the details of choosing and setting up a hydroponics system? Or perhaps you’re a seasoned grower but need a refresher or a quick reference? Here we cover the basics of what hydroponic systems are, how they are used for cultivating marijuana and the different kinds available.

The Basics of Hydroponics Growing

So what are hydroponics all about? It’s common knowledge that plants naturally grow in some type of soil or solid grow medium in order for roots to establish, which will then provide nutrients from the ground to feed the plant and allow it to flourish. Hydroponic gardening simply removes the soil and replaces it with an inert, soilless medium such as rockwool, clay pebbles or coco coir. Once established, the roots are then fed with a nutrient solution, the possibilities of which are numerous, more on that later.

So what is the purpose of ditching traditional soil and replacing it with a hydro kit? Traditional soil does have certain advantages over hydroponics but the main reason why so many growers go hydro is simple: bigger yields in a shorter amount of time. Traditional growing methods are dependent on the environment they are grown in, so they are susceptible to the sun (or lack thereof), precipitation (or lack thereof) and potential pests. With a hydroponic system, the grower is in complete control of all three elements. With ideal conditions (the right amount of light and nutrients), plants grow at an explosive rate (30-50% faster) and are ready for harvest much sooner than when grown in soil.

The History of Hydroponics

Hydroponic gardens can be dated back to the Hanging Gardens of Babylon as well as the Floating Gardens of China. This method has evidently been around for quite some time, however the credit for modern hydroponics goes to a man named William Frederick Gericke.

In 1929, while working for the University of California at Berkeley, he publicly promoted the notion of using solution culture for producing agricultural crops. The general public, along with Gericke’s colleagues doubted the idea, so to prove them wrong he grew 25-foot tomato vines using nothing but water and nutrients. He initially wanted to call the method aquaculture but later realized the term already existed and referred to the culture of aquatic organisms, so he went with the Greek terms of ‘hydro’ (water) and ‘ponos’ (labor) to get hydroponics. The method didn’t take off until after World War II when it expanded to countries in Europe, the Middle East and the Soviet Union

The prohibition of cannabis in the United States also made the conditions ripe for applying it to growing marijuana domestically vs. having it imported from countries like Mexico. Growing moved indoors out of sight of pesky law enforcement and could be done at a much faster rate with massive yields while using relatively little water and nutrients.

What are the Different Types of Hydroponic System

Hydroponic kits can seem confusing and intimidating to set up, but despite all the necessary components, it is possible to run an automated system with relative ease. Let’s look at some of the most popular methods employed by growers today.

The name certainly sounds fancy and high-tech and there might be some additional equipment to procure but this system simply involves getting oxygen to the roots by spraying a mist of aerated, fast-moving nutrient solution on them. Plants (including clones) can be held in little baskets containing rockwool or clay pellets. The roots grow out of this basket and then are showered with a very fine mist.

DWC involves a combination of oxygenated water and nutrient solution over which plants are suspended. The roots grow out into deep buckets, which contain oxygen stones at the bottom.  With complete access to water, nutrients and oxygen, plants grow extremely fast and yields are enormous. The DWC system also allows for many variations to the setup, making it quite the versatile technique.

Perhaps the most fun-sounding name of hydroponic techniques, bubbleponics is nothing more than a Deep Water Culture system that is top-fed. Here plant roots receive a stream of aerated nutrient solution from above, which makes roots grow even faster in the vegetative period.

Drip irrigation provides water to the planting medium by way of a drip emitter connected to tubing. The emitter is placed in a container or close to the root ball of every plant in the system. A flexible tube carries water from the nutrient reservoir and runs the length of the entire garden. This main line has little spaghetti tubing connecting it with the rockwool cube or plant container with an emitter that sits on a spike. The water can be recycled, though occasionally it gets discarded.

This is the method that most people probably think of when they hear the term hydroponics. Also referred to as Flood & Drain, rockwool cubes are utilized here as the soilless medium (though any inert soilless medium will do) which is then kept in a tray. From a separate container, nutrient-rich water periodically gets pumped into the tray, resembling a natural rain cycle. Once the plant roots have been bathed in the nutrient solution, it is then drained or pumped back into the original container to be used again later.

In this setup, a shallow film of water is continuously moved by gravity over roots that grow in a tray or PVC tubing that is aerated using water circulation, bubblers or sprays. The solution usually gets recirculated back into the reservoir. This method is better suited for small plants as the roots of large plants can end up blocking the water channel.

Probably the easiest hydroponic system in design, setup and maintenance. Doing most of the work here is a wick that uses capillary action to draw water towards the roots. The plant is kept above a reservoir, a rope connects the two at each end, pulling water from the reservoir into the plant container. Much like water being pulled up by a paper towel, no additional work needs to be done by the grower to keep the medium moist, making it an easy passive hydroponic system.