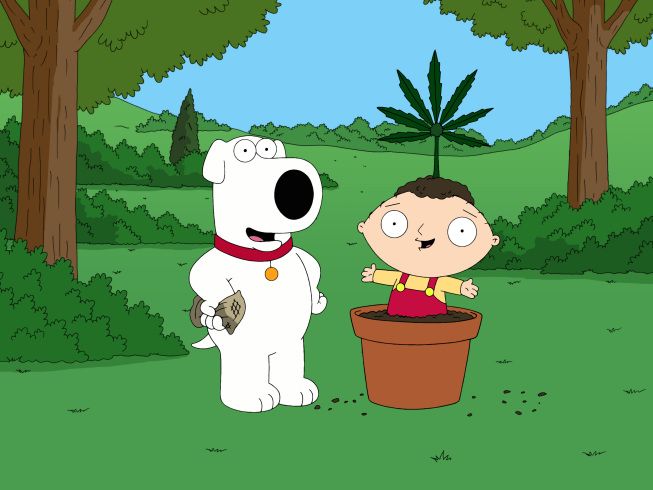 Family Guy has never been afraid to push the boundaries when it comes to social commentary, the legalization of marijuana is just one of many issues they've tackled.

The name of the episode references the counter-culture holiday on the 20th of April, which celebrates cannabis usage.  In the U.S., this is written as 4/20.  The episode actually first aired on April 19th.  The story begins with Peter accidentally killing a cat.  He and Brian go to hide the body, to stop its owner (Quagmire) realizing what they'd done.  They are stopped by police who are indifferent to Peter's beer and the blood stains on his clothes, but immediately arrest Brian for possession of cannabis.  This leads Brian to start a campaign to have cannabis legalized.  He is successful, pot use becomes widespread and life in the town is seen to improve as a result.  Lois' father, however, is unhappy because people are switching from wood-based products to hemp-based ones and this is costing him business.  He therefore persuades Brian to start another campaign, this time to get cannabis banned.  Brian succeeds and the town returns to being miserable.

Like The Simpsons, Family Guy is broadcast on Fox.  Fox is known to have been nervous about a 2002 episode of The Simpsons “Weekend at Burnie's”, which explored the use of medical marijuana.  That episode passed largely without controversy.  402, however, came in for a lot more criticism.  The Venezuelan government in particular objected to the broadly positive treatment of cannabis usage, while the Parents' Television Council also criticized it.  Having said that, the Parents' Television Council has routinely criticized Family Guy.  Overall the episode achieved ratings in line with what would be expected and there has never been any reasonable indication that the episode was responsible for any drop in subsequent ratings.  In fact most of the negative comments about the episode made by critics and regular viewers seem to have related to the killing of the cat rather than the positive portrayal of cannabis usage.  Some people felt that it was a bit excessive and with rather too much blood involved. High Times magazine awarded Brian the “Stoner of the Year” award in 2009.  This was and remains the first time that the award has been given either to an animated character or to a dog.