Marijuana in The Simpsons 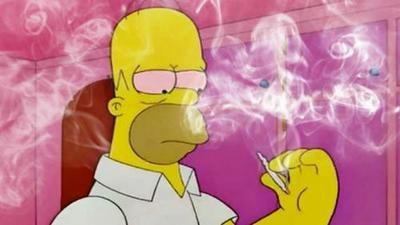 The Simpsons has spent years successfully blending family-friendly comedy with sharp social critique.  It has also touched on marijuana use, particularly medical marijuana use.

This episode of The Simpsons very nearly never saw the light of day.  Fox was very nervous about screening anything which could be interpreted as encouraging minors to take drugs.  By this point, however, The Simpsons was into its 13th massively successful season so the production team had their way. 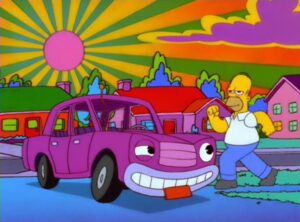 The plot sees Homer being prescribed medical marijuana for an eye injury.  He initially refuses it, but is persuaded to give it a go, naturally with comic results.  The episode ends with Marge persuading Homer to stop smoking to set a good example to the kids.  In spite of Fox's fears, the episode aired with hardly a ripple of controversy amongst viewers and was largely praised by critics.

Best line Lisa - (On smelling weed) “It smells like the art teacher's office”.

To keep Fox happy, Weekend at Burnie's never actually showed anyone smoking a joint. Other episodes, however, have shown recreational marijuana use, generally on the part of Otto Mann aka Otto the Bus Driver. marijuana.  In many episodes this leads to an accident which provides the basis for the rest of the story.  The character is probably best summarized as the classic loveable loser.  He has a menial job, is routinely shown to be homeless and has yet to find himself his soul mate (having dumped a fiancée who didn't like heavy metal), but he does seem to care about the kids he drives to school and he is a hugely talented guitarist with a love of heavy metal and classic rock.

The Simpsons also has a respectable amount of fan fiction dedicated to it and a Twitter user picked up on the topic of marijuana in The Simpsons by writing a play, in tweets, called Marijuana Simpson.  While this appears to have disappeared from Twitter, it's still available online and is an interesting read, incorporating themes as diverse as family disagreements and spiritual awakenings with a liberal helping of political analysis.  The anonymous writer also seems to know his or her literature, introducing two characters called Vladimir and Estragon, in a fairly clear reference to Waiting for Godot.