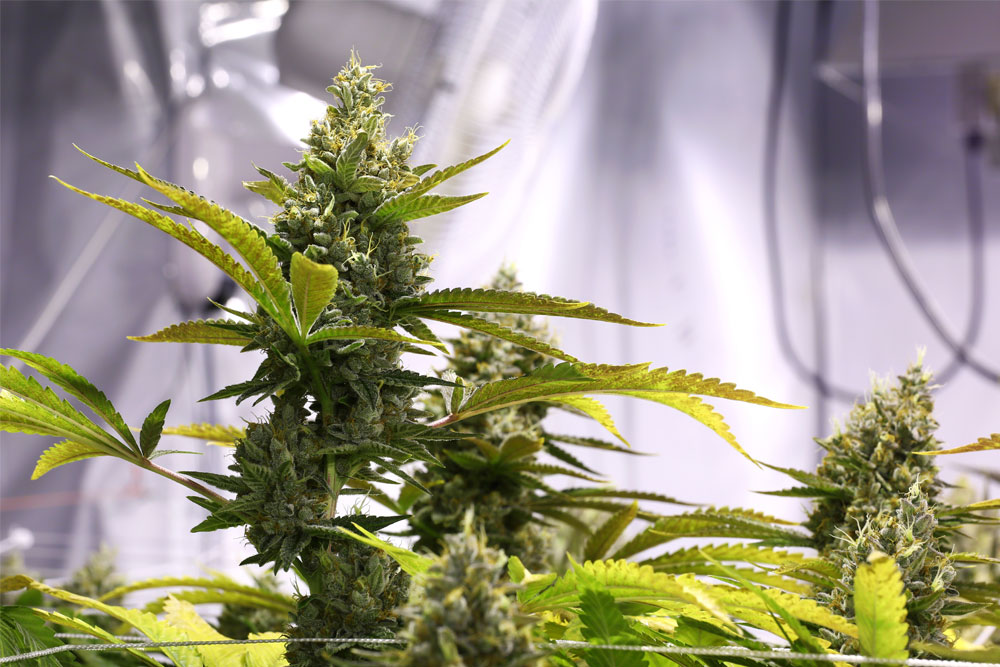 Although their smells are divine, they’re difficult to hide — especially while growing them inside your home. That's why cannabis odor control is so important. Fortunately, you can masque, reduce, and eliminate cannabis odors and keep your grow room ‘hush-hush’.

Why Does Cannabis Odor Matter?

You know that cannabis has a strong aroma. It’s part of the appeal for many recreational and medical users. However, the odor of cannabis can draw unwanted attention from your neighbours.

And if you’re not welcomed to grow cannabis in your city or country, the smell alone can get you in trouble.

Here’s the point. Reducing or even eliminating the odor is key to keeping your grow room discreet.

During the last six weeks of the plant’s life cycle, the odors become intense. This is when the trichomes produce the biggest concentration of terpenes. With more terpenes, comes strong, potent aromas.

Additionally, the temperature and humidity in your grow space have a direct effect on the odor levels. For example, when humidity levels get too high there’s excess moisture in the air. Excess moisture can perpetuate your cannabis plant’s aromas. Finally, a lack of airflow can also create stronger odors.

Let’s look at each of these factors in more detail. 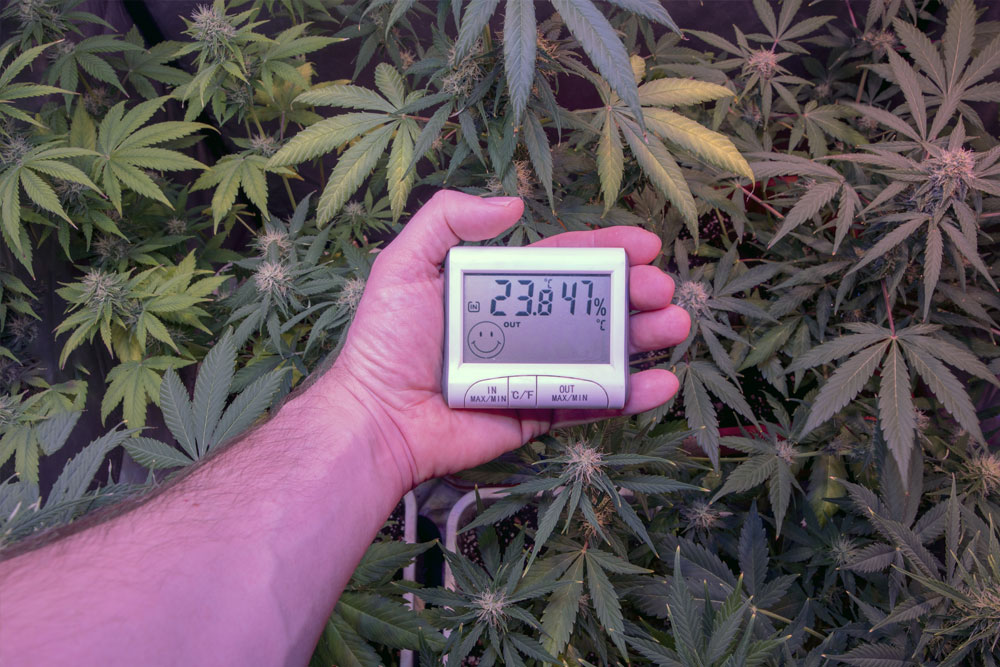 The ideal daytime temperature for cannabis plants ranges from 70 to 80 °F (or 21 to 27 °C). With the lights off, the temperature can fall just below this range.

Also, don’t let the temperature in your grow area drop below 60°F (or 15°C) otherwise it can negatively affect the plants’ growth.

The relative humidity (RH) in your grow space matters at every stage of the plants’ life.

But, from an odor perspective, humidity levels matter most during the flowering phase. The ideal RH at this time is 40 to 50%.

The grow lights you use can affect temperature levels and can even kill your plants if there’s a lack of circulation. To prevent this from happening you need cool, fresh air coming in. And you want stale, hot air going out. This is the recipe for proper ventilation.

But how do you keep all these factors in check? By following the helpful tips we’re about to share with you.

There are a few great techniques that can significantly minimize cannabis odors. If you decide to combine these techniques, you can remove odors completely. 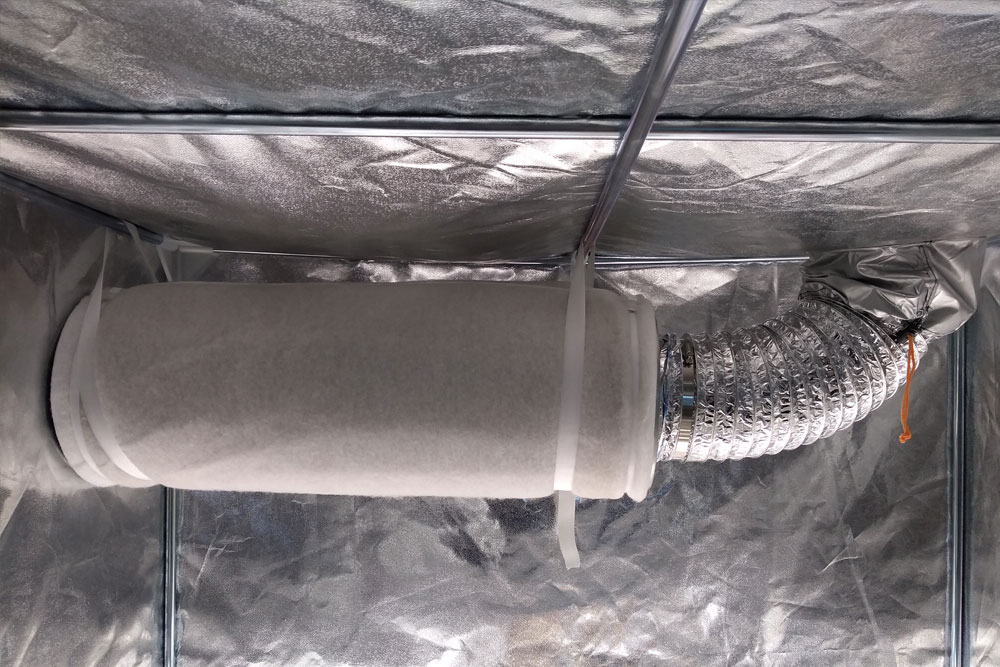 Carbon filters are the best way to eliminate cannabis odors in your grow room. Plus, they’re easy to maintain and can last up to 12 months before they need replacing.

Once set up, this filter pulls smells and impurities, like mold spores and dust, from the air using activated carbon.

Beyond that, a carbon filter is the most environmentally friendly technique around.

To set up a carbon filter in your grow room, you’ll need a vent (duct), a fan (exhaust system), and the carbon filter of your choice. Most small-scale grow rooms buy these pieces in 6-inch dimensions. At this size, they can easily hook up to most grow lights.

Once you’re all set up and running, keep the filter on 24-hours a day.

Carbon filters are awesome and do an excellent job of keeping your grow room a secret to visitors, neighbours, and potential thieves. Yet, they’re not 100% effective. Close to it, but not quite there.

But, if you also use odor neutralizers you could reach 100% elimination in cannabis odors.

Odor neutralizers have strong fragrances that can cover up and ‘neutralize’ smells.

Caution: Don’t put any odor neutralizing products in your grow room or tent. They could actually reduce or change the flavour of your buds.

You can, however, place them outside your grow space. They’re able to neutralize smells that way.

Some popular products that many indoor growers like include Ona Gel and Ona Blocks. These products are highly effective and relatively inexpensive. Yet, they only last a few weeks to a few months. So, pay close attention and replace them when needed.

Then there’s the Ozium Air Sanitizer to consider. It has a citrus clean smell that does a good job of covering up cannabis odors. Given its potency, a spray or two every now and then is all you need.

As mentioned earlier, if you use odor neutralizers too often, or accidentally put them in your grow space, they can degrade your cannabis’ natural aroma and flavours. When used wisely, they can help keep your grow room on the down-low.

What Not to Use

It’s equally as important to learn ‘what not to use, before you spend any time, energy, or money or your indoor grow space. This first item is a big ‘no-no’.

People might tell you that ozone generators can clean the air, remove odors, and kill mold. But, there are three major problems with them.

First off, they’re terrible for the environment. Secondly, the Environmental Protection Agency (EPA) says ozone generators are bad for your health.

And lastly, this piece of equipment is not nearly as effective as a carbon filter.

The second item on our ‘do not use’ list are air purifiers. They might help purify the air in your bedroom, but inside cannabis grow rooms, they’re essentially useless.

Finally, we don’t recommend using household fragrance products like wall plug-ins or sprays. These don’t have the strength to cover up the cannabis odors. And based on their chemical profiles, they don’t do any favours for your personal health.

So, you read our tips on how to reduce and eliminate cannabis odors. But, what if you want to go one step further, and buy a strain with naturally low growing odors. Pretty cool, right? Let’s take a look.

Blue Mystic is an Indica strain with a smooth, fruity berry flavour. It flowers in eight to 10 weeks and has a pretty mild odor during the growth process.

The Northern Lights strain has a classic skunky smell and taste when smoked, but during the flowering cycle, it’s one of the least pungent strains around. Also, it gives users a balanced head and body high.

As a pure Sativa strain, Durban Poison produces a strong cerebral buzz accompanied by the giggle fits. When smoked, it tastes like licorice and cinnamon. But, during its flowering cycle, it does not create potent odors.

Caramelicious is an easy strain to grow, produces high yields, and thrives indoors. The smoke is dessert-like and it promotes deep relaxation. It’s another strain with low growing odors.

When your priority is on cannabis odor control, you’ll want to consider the following recommendations.

Install a carbon filter in your grow room. Place odor neutralizers outside the room. And carefully monitor the room’s temperature and humidity levels.

Leave a comment below by telling us how you eliminate odors in your cannabis grow room.