What Are Wax And Shatter? 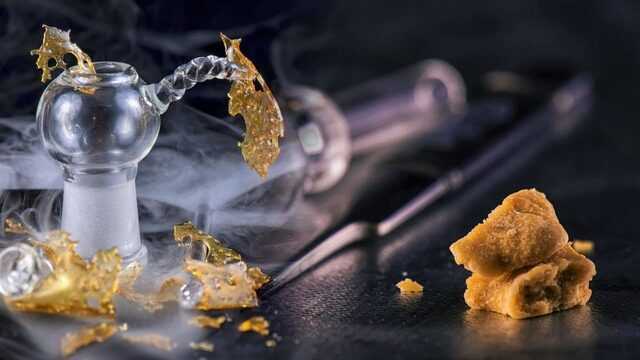 What are cannabis extracts?

Let’s start with the basics of cannabis extracts.  The cannabis plant itself is not used for food (for humans).  It can be safely ingested but it has no nutritional value.  Historically, the cannabis plant itself was valued for its fibre.  These days, however, its main value is as a medicinal plant.  All the medical benefits of cannabis are derived from its complex natural chemicals known as cannabinoids.  The most famous of these are Tetrahydrocannabinol (THC) and Cannabidiol (CBD).

For practical purposes it often makes sense to extract these chemicals from the plant matter.  The plant matter is used for other purposes.  For example, it can be used to make fibre or for compost.  The beneficial extracts are used for medical purposes.  These extracts are generally known as cannabis concentrates.  This is because they can be three to four times as strong as plain cannabis bud.  This fact makes them much easier to store and transport.

From a historical perspective, cannabis extracts are nothing new.  They are, however, really gaining in popularity.  Part of this is probably increasing awareness of the benefits of cannabis.

BHO is essentially what its name suggests.  It’s what you get when you use butane to extract the cannabinoids from cannabis.  BHO is closely associated with “dabbing”.  In fact it is sometimes known as “dab”.  Dabbing is the practice of using a dab rig to vape small quantities of BHO.  This is an effective (and low-odour) way of treating THC-responsive conditions.  BHO is also the base ingredient for cannabis wax and cannabis shatter.

What is cannabis wax?

Cannabis wax is a cannabis concentrate.  It looks and feels very similar to regular wax (or butter).  It is fairly easy to handle as it is solid but soft.  The flavour and aroma is less strong than bud.  It is, however, stronger than the flavour and aroma from shatter.  Wax doesn’t have a very long life span.  The process of making it does, however, preserve most of the beneficial cannabinoids.

How cannabis wax is made?

There are basically two ways of making cannabis wax.  The newer way is to use ice to extract the cannabinoids.  The resulting product is usually known, specifically, as “ice wax”.  Regular cannabis wax is made in essentially the same way as BHO.  The only real difference is that the mixture is constantly agitated.  Basically you can think of it like churning butter.

What is cannabis shatter?

Cannabis shatter is a cannabis concentrate.  It looks and feels similar to glass.  It is very brittle and shatters easily, hence the name.  This can make it hard to handle.  In particular, it can be hard to dose accurately.  Cannabis shatter has very little flavour or aroma.  This is due to the high level of filtration.  Shatter does have a much longer lifespan than wax.  It does not, however, have the same level of beneficial cannabinoids.

How cannabis shatter is made?

How to consume wax and shatter? 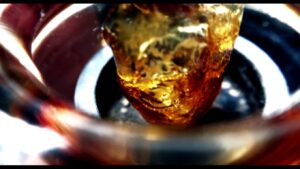 Wax and shatter are usually consumed by dabbing.  This is essentially a variation of vaping.  They could also be used in cannabis topicals.  As always though, be careful with the dosage.  Start low and go slow, even with topicals.

You cannot ingest standard wax or shatter as cannabis edibles.  You could, however, make cannabutter or cannaoil.  These are cannabis concentrates which are specifically made to be eaten.

The benefits of using cannabis extracts

The main benefit of cannabis extracts is convenience.  They are easy to store and easy to transport.  They are also easy to send through the post.  This could be a major benefit if you have your prescription sent to you.  Concentrates typically cost more than bud.  The delivery costs, however, could be a lot lower.

Additionally, concentrates produce less odour than bud.  In the case of shatter, there’s a big difference.  This could help keep you on good terms with your neighbours.

The downsides of cannabis extracts

The only real downside of extracts, in general, is that you lose out on the flavour as well as the aroma.  This can, however, be a positive.  It allows you to use a strain even if you dislike its taste.  This could make it easier to keep changing the strain(s) you use.

A specific downside of solvent-based extracts is the fact that they are made with solvents.  Some people may have concerns about this.  If this sounds like you, then there are other options you can try.  For example, you could use ice wax rather than standard cannabis wax.

Cannabis concentrates blend the best of the old (cannabis) with the best of the new (convenience).  Cannabis wax contains much of the same medical benefits as cannabis bud.  It is, however, much more concentrated, which makes it easier to store.  It is also lower odour.  Cannabis shatter is less potent but keeps for a lot longer.

In principle, both wax and shatter can be made at home.  In practice, there may be legal restrictions on doing this.  These legal restrictions can apply in places where cannabis itself is totally legal.  Even if they are not, the necessary equipment can be expensive.  It can also be challenging to learn the correct process in a safe way.  This is exactly why some places ban solvent-based extraction in private homes.