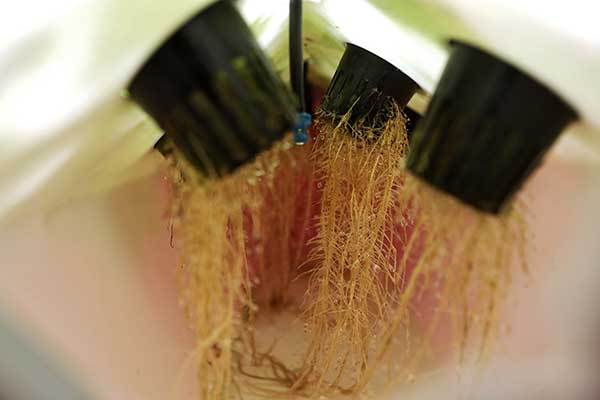 Marijuana growers are often concerned about the amount of space they have to grow their crops. The more plants they can grow, the more cannabis they can yield. However, room for those plants is limited. This is true for the home grower, and particularly true for commercial operations.

Aeroponics is emerging as the answer to this problem. This method of growing relies on freeing the roots of a plant from any type of medium. The plants must be suspended vertically in order to provide the roots with the space they need. The solution has allowed growers the free space they need to cultivate more crops. It has also been touted as a much more environmentally-friendly way to grow.

Ironically, aeroponics have not historically been considered an effective growth method. These systems were initially used so researchers could study the roots of plants. They were never intended for practical use. Over time though, farmers and researchers alike began to understand the many benefits this type of setup holds.

There are two main components in an aeroponics system: the reservoir, and the planter bed. The reservoir stores the water supply. It is also where growers can test the nutrient levels of the water.

The planter bed is where the plants will sit as they grow. The planter bed supports the plants, and slightly separates the root from the plant. This helps prevent mould and rot to the stem. Planter beds must include a misting system and a drainage system. Aeroponics rely heavily on moisture. If the water is not properly administered and drained, it could wreak havoc on a crop.

Lastly, the setup requires pumps that will transfer the water from the reservoir to the misting system.

At its most basic, aeroponics is the use of continual mist. This mist, not a growing medium, feeds the plants and provides them with the exact amount of water and nutrients necessary. The mist sprays the roots constantly, making sure they are always damp. Any excess water that drains off the roots falls into a tray and is pumped back into the reservoir to be reused.

Advantages of using aeroponics for growing

Aeroponics has become known as a revolutionary method of growing due to the number of benefits it holds.

The roots of a marijuana plant flourish when exposed to oxygen. With this type of system, those roots are constantly getting all the oxygen they need. In addition, the nutrients are dissolved in water that is directly applied to the roots. Plants can absorb those nutrients easier, and much more quickly because there is no soil that needs to absorb the food first.

Unlike plants grown in soil, harvest is much easier when done in an aeroponics system. Instead of cutting the plant down, it can simply be removed from the setup.

Aeroponics setups are also known for being one of the most environmental ways to grow. They take up less space, which means more plants can be grown. This is good for the grower short on room, but also good for the planet. More plants means more CO2 is removed from the environment, and more oxygen is put back into it. Aeroponics systems have also received praise for the limited amount of water they use, further lessening the harmful impact of growing on the environment.

Aeroponics systems are high-tech and fascinating. It’s why they’re considered to be so revolutionary, but also one of their biggest disadvantages. These systems are highly controlled, and require a great deal of know-how before serious results are seen. For this reason, this method can be quite challenging for beginners.

The setups are also very costly. Novice growers should learn more about growing cannabis before making the investment.

Aeroponics systems are not forgiving when mistakes are made. A power outage over a soil crop may mean an adjustment needs to be made to their light schedule. Unfortunately, a power outage will interrupt the constant mist of water delivered to the plant. In just a few hours, the entire crop could be destroyed.

For this reason, alarm systems are often put into place, backup power supplies are ready, and someone with the knowledge to correct the issue is always on hand. Power outages aren’t the only thing that can go wrong in an aeroponics system, either. Nozzles can become clogged, pumps can break, and reservoirs can become completely empty.

If anything, aeroponics systems are known for being extremely beneficial for the plant when set up properly. Due to this, when this method is used to grow marijuana, it’s a superior product. The roots remain strong during the entire growth period, which allows the plant to flourish and thrive, and develop large healthy buds covered in trichomes.

In addition to the buds being substantial, there are also typically more of them in aeroponics systems. Growers using this method will see many more buds than they would in soil. This is a result of not only the setup, but also the fact that the weed has been grown indoors.

The only area in which the quality of marijuana grown in aeroponics is negatively affected, is the flavor profile of the cannabis. Soil can provide a rich array of tastes and smells, and these are often not as present in aeroponics systems.

Aeroponics systems have been heralded as a gift to the environment, and to any grower looking to reap its many benefits. However, growers need to fully understand the system and how it works before jumping in. Otherwise, they may find they are in over their head and lose plants that would have blossomed in another medium.