What's the difference between THC and THCa? 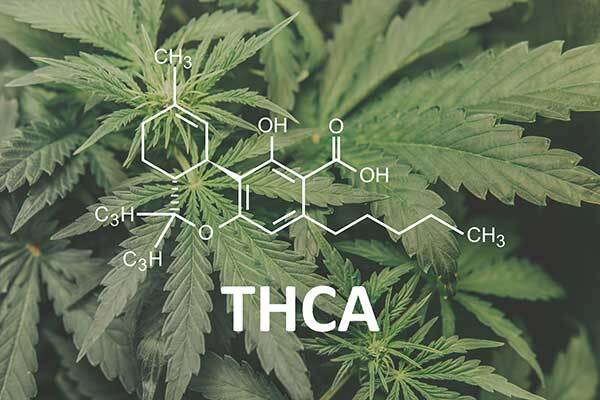 The Difference Between THC and THCa?

In purely chemical terms, THCa is the precursor, while THC is the actual compound. THC can effectively bind with the CB1 or CB2 receptors in the human body's endocannabinoid system, but the same cannot be said about THCa. Its large 3D structure doesn't allow the molecule to bind with the CB1 receptors. Also, THC’s bioavailability is far greater than THCa.

Delta-9-tetrahydrocannabinol (Δ-9-THC) is one of the most well-known cannabinoids. Even if you are a novice to the world of weed, you will have heard about it in any debates and discussions. If you are a pro, the chances are high that you are already high on it! The psychoactive effects of the cannabis plant are primarily because of tetrahydrocannabinol.

It follows that there are many studies and research projects, focusing on determining THC's true potential and its effects on the body. THC may be the most well-known of the cannabis cannabinoids but there are literally hundreds naturally occurring in marijuana. Here we will discuss the distinguishing features of the lesser-known THCa and elucidate the difference between THC and THCa.

Now, let us look at how THCa is converted into THC. You might be familiar with the process of decarboxylation. It is a chemical reaction in which a carboxyl group is removed, facilitated by significant heat or intense sunlight. Interestingly, only this decarboxylation enables the various cannabinoids to interact with the endocannabinoid receptors found in the human body.
THCa has one carboxyl group more than THC. Once it undergoes a decarboxylation reaction, the extra carboxylic acid group is lost, and THCa is converted into THC. The resulting chemical compound, can easily interact with the CB1 receptors found in the human body. As a result of this interaction, a cannabis user feels the psychoactive effects associated with THC.

The next important question concerns converting THCa into THC. Decarboxylation does that, yes, but how does decarboxylation take place? Heating the raw cannabis leads to a decarboxylation process. This heat can be provided from sunlight, by increasing the room temperature or by exposing cannabis to direct heat. The last point specifically refers to exposure methods such as smoking, vaping, or DIY carboxylation.

As mentioned earlier, for a cannabinoid to produce its effects, it must bind with its receptors in the human endocannabinoid system. THCa’s chemical structure does not allow it to bind to the CB1 receptors. As a result, the cannabinoid cannot produce any effects popularly associated with the cannabis plant. Hence, the psychoactive effects for which THC is famous are not felt with THCa. So we can confidently dub THCa as non-psychoactive.

It is non-psychoactive, yes, but that does not mean that the compound doesn't have any side effects. Some common side effects associated with the consumption of THCa include dry mouth, red eyes, dizziness, increased heartbeat, and an overall feeling of fatigue. We should note that most of these side effects are commonly associated with THC. The chances that you will feel them after consuming THCa are quite low.

Furthermore, feelings of euphoria or extreme creativity that are commonly associated with THC consumption are not associated with this compound. However, THCa can show up on a drug test if you have consumed this cannabinoid recently, for example, in the last two to three days.

If you take any drugs regularly, it is also important to be aware of any possible additional drug interactions. THCa can interact with over-the-counter drugs as well, which is why it is necessary to speak to the pharmacist about this cannabinoid consumption's potential impact on other medicines.

Potency, dosage, and THC percentage always feature in any debate or discussion involving cannabinoids. THCa is no exception to this approach. Next we will cover what a “good” THC percentage is. It is important to read the labels and third-party lab reports before purchasing cannabis or cannabis-derived products.

Things can get a little confusing when trying to determine potency by looking at the percentage of a cannabinoid such as THCa. Currently, liquid chromatography and gas chromatography are the primary methods used for potency testing as far as tetrahydrocannabinolic acid is concerned.

The maximum percentage of inactive THCa which can be converted into active Delta9-THC is 87.7%.

That would be all from this brief. As we have covered, there is a marked difference between THCa and THC. These terms cannot be interchanged since the chemical composition of the two compounds is different.

Naturally, the effects produced by these compounds contrast tremendously. There are some potential benefits associated with THCa, such as its neuroprotective, anti-obesity, anti-inflammatory, and anti-nausea profile. Currently, many studies focus on THC, so we cannot be 100% certain about this cannabinoid's effects on the human body.

More From Science & Facts
MOST READ
MOST RECENT
SHARE THIS BLOG
MSNL RELATED ARTICLES
MSNL POPULAR ARTICLES
MSNL 2022 GUIDES.
LEARN FROM LEADING
INDUSTRY PROFESSIONALS.
MSNL have taken the hard work out of finding factual information.
Browse our encyclopedia of Marijuana guides and get straight to the point!
SIGN UP & GET 10% OFF! Sign Up to the MSNL Newsletter to receive exclusive discounts!
20 Years Of Quality and Excellence
The journey to what MSNL is today started as a hobby but quickly turned in to something much bigger. In that time, we have honed our craft and helped customers all over the world to grow their own cannabis.
Our aim is to help you grow the best weed you can,
empowering you with detailed grow guides and resources to make the most of each seed. Read More...
front