How to Super Crop Your Cannabis Plant 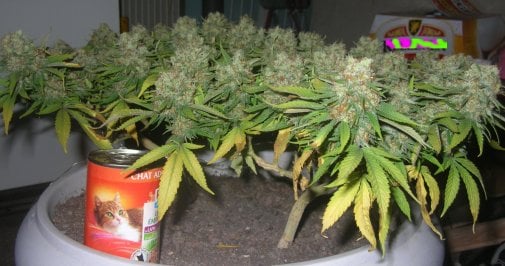 Super cropping is a "high-stress" or intensive training technique commonly used on cannabis plants. This is done to increase it's yield, bud size and strength significantly. The plant is deliberately stressed or 'hurt' by bending and retraining upper growth. This allows lower leaves to get the same amount of light as higher leaves, which then produces more growth sites and better bud yields. These are the biggest benefits of super cropping. While humans may love the effects THC brings, not all mammals do (and let’s face it, not all
humans either.) And although it’s known that animals will eat some of the flowers (buds) cannabis plants produce, they will never eat every single bud that’s on the plant. This may not appear odd, except for the fact that animals are known to strip other plants entirely bare.
This has led many to believe that the THC in cannabis plants may actually be used as a deterrent for animals that would otherwise eat the complete plant, preventing more seeds and plants from growing.

But what does this have to do with super cropping marijuana?

When a cannabis plant feels stressed, it will release more of this THC in a way to protect itself against predators. And when you super crop your marijuana plant, it stresses it out to the same degree so that it releases more THC. That doesn’t only make the buds more potent, but it
also allows more light into lower branches, providing for some of the biggest cannabis plants possible.

How to super crop marijuana

To super crop your cannabis plant, all you really need is your plant, your fingers, and just in case things don’t go exactly as planned, some heavy tape such as duct tape. The idea is to create a flat canopy along the top of the plant or plants so that no one stem is taller than the rest. This can be done by gently pinching and bending the stems. This process can be repeated with the remaining branches that are sitting higher than others and hopefully, none of them have their skin broken. If small tears do occur however, covering them with duct tape for about one week will give the plant enough time to create its own ‘bandage’ in the form of a large knot that will cover the tear and allow nutrients to move to the branch.

If some of the branches do pop back up towards the top after being super cropped, they can either be tied down using low stress training techniques, or they can be left to grow on their own. Even if they don’t remain fully down, after super cropping the plant is still likely to develop colas as opposed to deliver nutrients to a branch it believes to no longer be there. Because of this, even growers that didn’t have a completely successful super crop should still see significant super cropping results.

Super cropping marijuana is a high-stress training technique, meaning that it’s invasive to the plant and can cause it some stress. However, the stress the plant receives with this method should not be enough to completely kill it, and it can actually provide better yields than plants that are left in nature to grow on their own, as the plant works harder to maintain its health. However, because it is a higher-stress method, it should not be used with auto-flowering plants, as they simply don’t have the time to recover that other cannabis plants do.