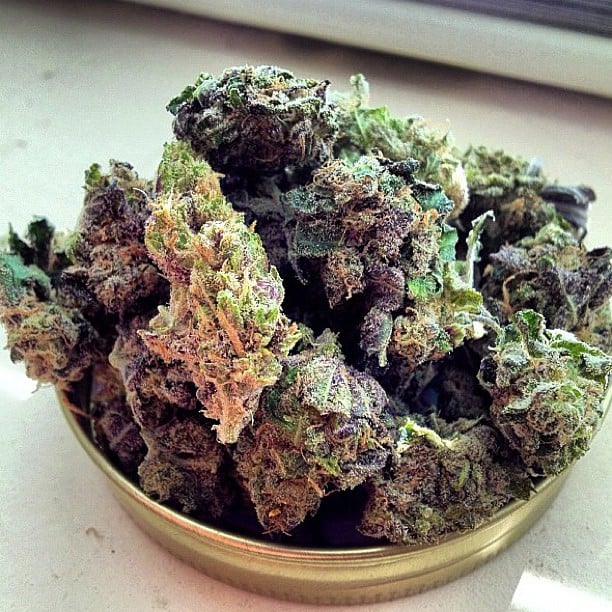 If you love smoking joints and want to smoke an actual joint instead of pulling marijuana through a makeshift pipe or bong, the Yellow Pages make for great rolling papers. As they are so thin, these pages will burn very much like a joint does. The thinness also helps to bind this type of smoking paper because you won’t need any glue or adhesive – just a little bit of your own saliva, just like when you roll a joint.

Even many who prefer smoking a pipe or bong prefer this method when their smoking devices are not nearby, because the Yellow Pages are often so accessible. This can also be considered one of the easiest outs when you’re left without paraphernalia or rolling papers.

When corn is in season and you’re busy shucking it just before dinner, save those corn husks, because they can be 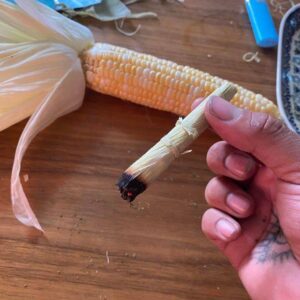 used as an alternative to smoking papers. In fact, corn husks are so useful as a rolling paper alternative, that in countries such as Jamaica, and even many in California, use them as a natural method instead of regularly doling out cash on smoking papers. When dried, corn husks are still soft enough to be rolled up, and they are fibrous, meaning that they’ll be secure enough to hold your marijuana inside and they’ll smoke slow and smooth, just like rolling papers.

Because corn husks are natural, just like the marijuana you’ll be placing inside them, they are also one of the healthiest alternatives to use. They don’t have ink on them, like the Yellow Pages will, and no artificial items for the smoke to pass through before you consume it.

Your next pipe may be sitting in your fridge or on your counter, and you don’t even realize it. Apples are one of the 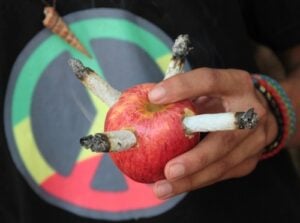 oldest tricks in the book for creating a makeshift pipe, and they can be a great alternative even for those that love their smoking papers. Before you begin creating it, it’s important that you choose a fresh apple. You’ll be poking many holes into it and if you use a softer apple, it could collapse and block all those tunnels you’ve just created.

To make those holes, you’ll need a pen. While other items such as pencils and straws are used by some, these are not ideal. Not only can pencils break inside the apple, but they also can’t be hollowed out, which will be necessary if you want a mouthpiece for your apple pie (although a mouthpiece isn’t necessary in itself). Straws also don’t have a very sharp tip, which is necessary, and they are also not heat-proof, so they also can’t be used as a mouthpiece.

When using a pen, make sure you choose one that can have the ink tube removed from it. Once that is out, you can then start making the necessary holes. Start by removing the stem from the apple, using either the pen or your own fingers and twisting it. The advantage of using a pen to remove the stem is that you can then use it to create a small hole where the stem used to be. The hole needs to be about halfway through the apple, so push through until it’s there, but don’t go any farther than that.

On the other side of the apple, you need to create a hole that meets up with the hole you’ve made on the other side. This will be the carb that you’d find on any pipe, so it needs to meet up the other hole so you get air into the center of the apple. It also needs to be small enough to place your finger over so you can cover it when lighting the marijuana and then uncover it when you want that rush of smoke into your mouth.

After this has been done, you just need to scoop out the top of the apple where you created the first hole to create a space large enough to hold your marijuana and put your ground up bud inside of it. Your apple pipe has now been created and you have a choice on how you want to smoke from it. You can either place the hollowed out pen into the side of the apple, using that as your mouthpiece, or you can place your mouth directly over the hole in the first side of the apple and consume it that way. 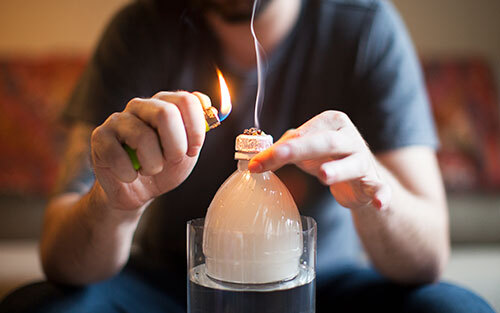 No, this isn’t one of those iron lungs that are used for medical purposes. It’s actually just an empty 2-liter bottle that is often used to hold soda. The bottle needs to be cut into two different pieces, with the cut being made about 1/3 of the way from the bottom. Using a large plastic bag, such as those you get from the grocery store, use duct tape to secure it around the bottom that has just been cut off. Then scrunch the bag up into the bottle.

Aluminium foil then needs to be placed all the way around the opening of the bottle; the place where the soda would have once been poured out. Poke holes into the foil and place the marijuana on top of the holes. Light it, just as you would light it if it was in a bowl and slowly pull out the plastic bag as you do. This will create a vacuum inside of the bottle. When the bag has been pulled entirely out, remove the foil and quickly place your mouth over top. Inhale the smoke and if desired, push the bag back in as you do. This will ensure that all of the smoke rushes through the opening and there is little waste.

This can also be done with a very large bucket that’s filled about 2/3 full and does not include a plastic bag; although you will still have to cut the bottle. Place the foil over the top and poke holes in it, just as you would when creating the lung. Place the bottle inside the water, holding it down so it doesn’t float. Place the marijuana on top of the foil and light, pulling the bottle up slowly as you do. Do not allow the hollowed out bottom of the bottle break the surface of the water. This will also create a vacuum and fill the inside of the bottle up with smoke. Once that’s been done, you simply remove the foil again and inhale.

Using hot knives is one of the oldest ways to smoke marijuana without using smoking papers. And while it’s usually 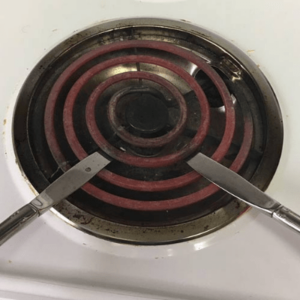 done to smoke resin or hash, it can also be done with a small piece of marijuana. Place two stainless steel knives and the marijuana you’d like to smoke beside the stove. Turn one of the burners closest to you to medium-high heat and wait for it to get very hot. As it does, hold the knives down onto the burner to heat these up as well. Make sure you don’t heat the handles of the knives, as this could end up burning your hands or fingers.

Once the burner and the knives are hot, place a small piece of marijuana on the tip of one knife and use the other hot knife to squeeze it. It will begin to smoke immediately, so be prepared to lean down and inhale as fast as you can. You can also place the marijuana directly on the burner and squeeze it down onto the burner, which will also cause the smoke to rise up.

Some people are nervous about working hot knives close to their face. If this is the case you can use an empty paper towel roll, or other hollow tube held between your mouth and the smoke.

Finding yourself short of smoking papers can be frustrating when all you want is a good smoking session. Luckily, rolling papers are not the only way marijuana can be smoked and in a pinch, any of these five methods will work and have you sitting down for that sesh pretty quickly.

Check out our blog by clicking here.