Why Everyone Needs To Grow The Runtz Strain? 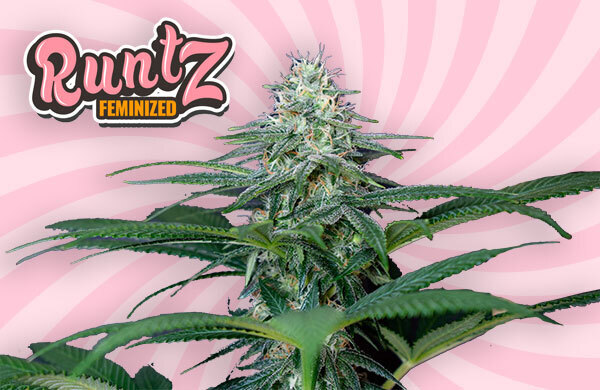 The Runtz strain is, without a shadow of a doubt, one of the very best cultivars currently available for home and commercial growers alike. A multi-award winner, taking out the converted Leafly "Strain of the Year" in 2020 - one of the most highly respected awards worldwide currently, the Runtz has quickly become a favorite amongst growers for a few key reasons.

But what exactly makes Runtz such a great strain?

For starters, the Runtz strain (and all of her offshoots) is incredibly easy to grow. Whether you're a first-time grower or a seasoned veteran, you'll be able to get great results with this plant. It's also highly resistant to mold, fungal attacks, and pests. Plus, she comes with a super interesting terpene profile that is downright delicious and works in harmony with the Sativa/Indica split.

Let's take an in-depth look into why Runtz is one of the most popular strains of the 2020s, and why you should be ticking it off the list with your next grow!

What Makes Runtz Strains So Popular?

Ok, so we quickly explained why the OG Runtz is one of our top choices. But, since she first hit the soil back in 2020 breeders have pushed the genetic line for all she is worth. There are now a bunch of Runtz strains' to choose from, and for the most part, every single option is pretty damn amazing.

From the moment the OG Runtz was placed on the market, growers all around the globe knew they had something special on their hands. Born and bred out of the west-coast scene, Seed Company Cookies combined two legendary Cali classics (Zkittlez x Gelato) to produce Runtz. This strong genetic lineage has created a strain that is not only super stable but also incredibly easy to grow. Although there will be some slight variation between phenotypes, you can expect each and every seed to stay within the outlined growing profile (more on this later).

But, as any experienced cannabis smoker or cultivator knows - the proof is in the pudding. And there's no doubt that Runtz delivers some of the most potent, flavorful, and supremely-balanced buds you're likely to come across.

With a max height of 180cm (that's around 6 feet), Runtz isn't the smallest plant - but with some basic training methods, you can keep each plant at an easily manageable height for indoor grow spaces. We have tested her indoors under both LED and HID lighting options,  and she responds very well to both - although we recommend sticking with a minimum of 600w HPS or a higher-end LED board if you want to see the absolute best results. For outdoor growers, Runtz is an excellent option. She loves warm and sunny weather but also responds pretty damn well to more inclement conditions.

Is Runtz Indica or Sativa?

Runtz is about as close to a balanced 50/50 split hybrid as you can find on the market currently, although she is still classed as Indica dominant.

There is more than one reason behind why Runtz is one of the most popular options available right now. These days, things move extremely quickly in the wonderful world of cannabis. Increasing legality (especially in the USA) has meant that breeders are finally able to legally pursue their passion, resulting in new strains becoming available almost daily.

So, the fact that Runtz has been on top of growers' hit lists for over two years at this point is a true testament to just how great the strain is.

In terms of taste, she just hits different from a bunch of the other options. Folks in Europe, Australia, New Zealand, and Asia (actually anyone outside of North America) may not have had the opportunity to try Runtz's namesake - the tasty as hell Runts candy. Even if you do live in the states, if you didn't grab a pack before 2014 then you're fresh outta luck as this was the year the candy was discontinued.

But, for those of you who haven't had the pleasure - Runtz candy is (or was) a fruity, tangy, and all-around delicious little snack. And that's exactly what you can expect from the herb. When we first had the chance to give Runtz a hit back in 2020, a friend described the flavor as " a rainbow explosion of epic proportions", and we think that's almost spot on.

Earthy and diesel flavor lovers may be a little disappointed, but for candy lovers, there are few strains better. Starting with sweet floral notes, the flavor rounds out to a more berry and citrus finish that leaves an almost sugary aftertaste on the tongue. Delicious, delightful, and downright banging!

What are the effects of Runtz weed?

The 55% Indica/45% Sativa split really does offer the best of both worlds.  That being said, the effects will still be slightly Indica dominant.

For those of you who don't know - this means that while you'll still get a nice cerebral high from Runtz, it won't be as intense or impactful as some of the other options on the market. The comedown is also relatively gentle when compared to other strains, with most people reporting a nice sense of calm and relaxation rather than the all-out couch-lock that some Indicas can induce.

This makes Runtz an ideal strain for social situations or enjoying a nice meal with friends. You'll still be able to function and carry on a conversation, but everything will feel a little more fun and engaging.

Runtz is also an excellent strain for managing pain, sore joints, stress, anxiety, and depression.  So, if you're someone who struggles with any of these issues on a regular basis - give her a go!

Last but not least, due to the high THC content (usually between 20% to 24%), Runtz is a great late-night smoke. A slightly larger than normal dose will leave you feeling beautifully sedated and can give a huge amount of relief to those looking for a natural sleep aid.

Which Runtz strain is the best?

With a range of Runtz strain offshoots available, is the original Runtz still the best on the market?

Not really the easiest question to answer, as it is really based on personal preference. While we still think that Runtz is the best option, let's have a look at a few others that we rate highly.

Pink Runtz offers similar THC levels, ease of cultivation, flavor profile, and trichome coverage. But, in our test grows we have found that she just doesn't produce as consistently high yields as Runtz.

Mint Runtz, on the other hand, is a slightly different beast. She's got a much higher THC content (upwards of 28%) and produces even more resinous buds than Runtz. However, she can be quite a fickle lady to grow and isn't the best option for first-time growers. This strain is very hard to find, and seed stocks have been unavailable since late 2021

The Runtz Autoflower strain will work great for growers looking for a shorter option that goes from seed to harvest in less than 11 weeks, but again she just cannot produce the same size yields as her feminized, photoperiod forebere.

So, for us here at the MSNL offices, the best Runtz is still the original!

What is the strongest Runtz Strain?

Mint Runtz is up there with 28%, but seeds are impossible to find right now. All of the rest of the Runtz family tops out at around 24% - strong enough for even the most seasoned stoner.

How to grow Runtz

Some strains are very picky and need a particular set of conditions to hit their potential (or even grow at all). That's really not the case with Runtz. The choice is in your hands.

We mentioned earlier that she can reach the lofty 6 foot mark. This can be easily tamed though. Using techniques like topping, dimming, or other shaping techniques allows the cultivator to dictate exactly how tall or small the plant grows. We found that a combination of topping and scrogging produced the best results, with the plant really opening up and allowing for maximum light penetration throughout the entire canopy.

If growing outdoors, make sure to start her early. Runtz benefits heavily from a long vegetation period and will reward growers who get her going at the very start of the season with truly bumper crops.

Runtz's flowering time is a relatively short 8 weeks, and she should be ready to harvest in mid-September.

Indoors, using a hydroponic setup will really help her to thrive. We've found the best results come from using either a deep water culture (DWC) or bubbleponics system, although we also found great results from a simple coco-coir setup.

With Runtz, its hard to put a foot wrong!