How to roll a Blunt, Spliff or Joint 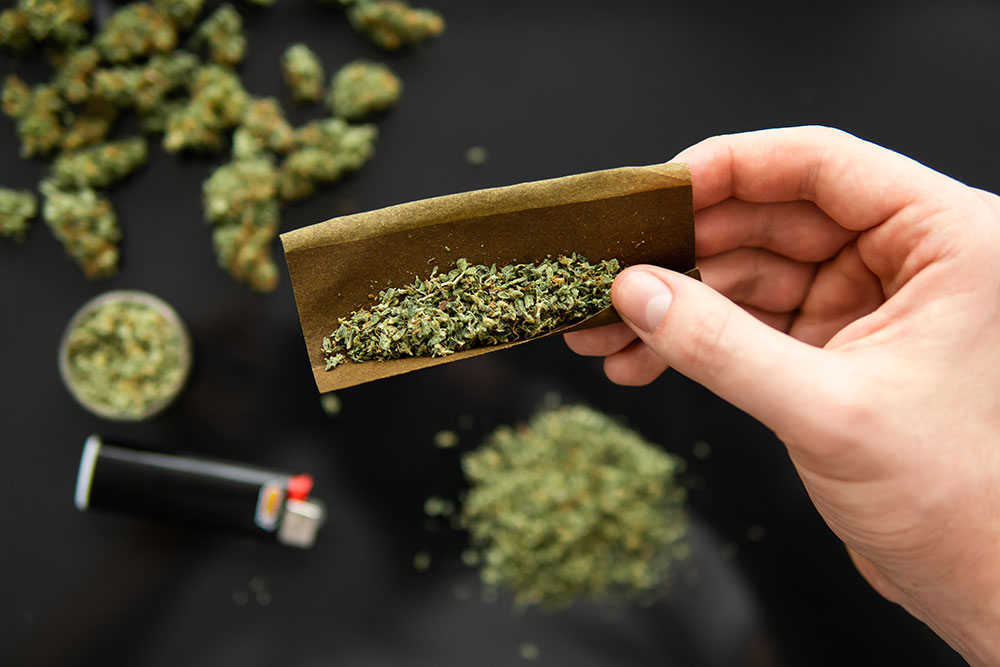 The terms blunt, joint, and spliffs are sometimes used interchangeably, but they shouldn’t be. A joint only contains marijuana, while a spliff also includes tobacco. A blunt on the other hand, also only contains cannabis, but is rolled in blunt wraps.

What is a Blunt?

A blunt is like a joint, but it uses blunt wraps rather than the rolling papers used to roll joints. These got their name from Phillies Blunt brand of cigars. However, any time cigar or tobacco paper is used to roll cannabis, it’s called a blunt. Blunts only use marijuana, there is no tobacco or anything else inside.

When making a blunt, you can use any kind of tobacco paper you choose. Some simply empty out a cigar, while others use blunt wraps, which work similarly to rolling papers. Many people find it easiest to simply purchase blunts, as cigar paper can easily crack and break.

Due to the fact that blunts use cigar papers, the only real color option one has is brown. In exchange for this lack of variety though, you get a beautiful contrast of striking green cannabis against the dark brown of the paper. Additionally, cigar papers are typically longer and can hold more than rolling papers. This typically means that blunts are longer and wider.

For those that like a little extra flavor in their smoke, blunts can certainly provide that. Blunt wraps are typically made of compressed tobacco leaves, which can lend the taste of tobacco to the blunt. For some this is good, and for some, it’s a drawback of blunts. That flavor will also work differently with different strains, so you may wish to try different strains before settling on one you like best.

The flavor isn’t the only benefit you’ll get with a blunt. Cigar paper burns much more slowly than rolling papers. This is due to the fact that it is much thicker. That slow burn makes blunts great for passing around a large group, or just enjoying a nice, long smoke at the end of the day.

Thanks to that slow burn, if you smoke a blunt on its own, you’ll likely smoke more too, and get even higher. Meanwhile, that tobacco in the wrapping won’t only bring a nice taste, but can also give you an added little buzz.

How to Roll a Blunt Nothing will make you feel more like a master of marijuana than rolling a fat blunt. It can be tricky and might take a fews tries, but keep going and you’ll get there.

1.) Using a very sharp knife, cut down the center of a cigar or cigarello. Remember not to slice right through the cigar. You only want to take the very top layer of the tobacco leaf.

2.) Remove all of the tobacco. Do this carefully, as the cigar wrap is brittle and will easily break apart.

3.) Grind up your favorite strain. You’ll probably need anywhere from one to three grams, depending on how big you want your blunt.

4.) Pack the cigar wraps with the ground-up bud. Spread it out thinly and, if you’d like, add hash or another concentrate. This is not the most efficient way to enjoy your concentrates, but it will help the blunt burn more evenly. It’s also very tasty.

5.) Give each side of the blunt a generous lick. Your saliva is the only thing that’s going to hold the blunt together, so don’t feel as though you can use too much. It’s messy, but it’s worth it.

6.) Now is the time to roll it up. If you’ve rolled a joint before, use the same method, bu the careful. The paper will break much more easily. If you’ve never rolled a joint, fold one side of the cigar wrap over the marijuana. Gently push it underneath, so you have a tight roll, and then roll towards the other end until you’ve rolled the entire wrap.

7.) To really seal your blunt, you then need to run a lighter over the seal. Keep it moving as you run the flame back and forth so you don’t scorch the wrap. Continue doing this for several minutes.

8.) Light your blunt and enjoy!

Remember that rolling your own blunt is tricky business. There are many places online that have pre-rolled blunts for sale, and this can allow you to enjoy them without all the fuss. But remember blunts are not for the faint-hearted, they are potent and because of this the Gorilla Glue Strain is great match.

What is a Joint?

Like a blunt, the interior of a joint is strictly cannabis and nothing else. However, joints are rolled in rolling papers, not cigar wraps.

There doesn’t seem to be a clear consensus on where the term ‘joint’ came from. According to Wikipedia, it is an adjective that means “joined,” derived from the French. By 1938, the term had become commonly used to refer to a marijuana cigarette. Some think the term is used because when you roll a joint, you must join the two sides. Others believe that it comes from the fact that you can attach, or join, several rolling papers together to make a large joint.

The papers used to roll joints are typically very thin, making them easier to roll. These papers are made out of many different materials including wood-pulp, rice, and hemp. Each type will have different properties including thickness, the ability to roll them, and how quickly they burn.

Rolling papers used to come mainly in white. Today you can find them in different colors, different patterns, and even different smells and flavors. For the purists out there though, there is still a wide range of plain, flavorless papers that will let you enjoy the taste and smell of the strain.

Joints are the preferred smoking choice over blunts and spliffs. This is likely due to the fact that joints bring many benefits. Firstly, the size of joints make it easy to store and transport them. They can be stashed inside a coat pocket, or kept discreetly in a drawer. They are also very easy to roll, much more so than blunts. Due to the fact that they don’t have any tobacco in them, in neither the paper or in the actual weed, joints are also the healthiest choice of the three.

How to Roll a Joint If you’re going to be any kind of smoking enthusiast at all, you must learn how to roll your own joint. It does take some practice, but you’ll get the hang of it in no time.

2.) Hold the paper with one hand so that the crease is at the bottom. You can also lay it on a table this way, but you might lose some weed when you pick it up.

3.) Using as much marijuana as you want, spread it evenly along the bottom of the paper.

4.) One side will have an adhesive glue that will be yellow or a slightly different color than the rest of the paper. Using the other side, fold it over the marijuana. Tuck the paper you just folded under the weed and then roll towards the adhesive. Using a small bit of saliva, lick the adhesive. You don’t need to use as much as you do when rolling a blunt.

5.) Seal the joint by simply pressing the adhesive glue onto the portion of the joint you’ve rolled.

6.) Twist one end to keep the weed inside.

7.) On the other side you can place a roach, or a crutch. Even a small piece of rolled-up cardboard is enough. This can keep that end open and prevent it from getting soggy.

When adding your marijuana to your joint, you can kick it up a notch by adding kief, wax, or oil. As long as it still only contains pure marijuana, it’s still a joint. The Girl Scout Cookies strain is a perfect example of a great strain for a joint! Cherry Kush would also make a delicious joint.

What is a Spliff?

Spliffs are similar to joints in the way that they are rolled in rolling papers. It is only what’s inside that’s different. A spliff includes cannabis and tobacco. That’s actually how they got their name. They “split the difference” between marijuana and tobacco, although most have more weed than they have tobacco.

While spliffs and joints look very similar, the taste of the two is very different. With a joint you only get the flavor of your favorite strain, unless you’re using flavored papers. With a spliff, you’ll definitely taste the tobacco. Like when using the tobacco papers of a cigar wrap, you may have to test with different strains to determine which combination you like best.

There are many benefits that come with smoking a spliff. The first is that it will burn slower and more evenly than a joint. This is because tobacco burns at a slower rate than marijuana. Additionally, tobacco can also provide for a more energetic high. Due to the fact that the smell will not only be that of marijuana, but also tobacco smoke, it can also help mask the weed smell for those that want to be more discreet.

How to Roll a Spliff 1.) Grind your weed, using a bit less than you would with a joint.

2.) Hold a cigarette over the marijuana, making sure the part with the tobacco is facing down, roll the cigarette slightly between two fingers. Some of the tobacco will fall into your weed. Once you have as much as you want, stop rolling the cigarette. Mix your weed and tobacco together slightly using your fingers.

3.) Hold a rolling paper with the crease on the bottom.

4.) Fill with your weed/tobacco mix.

5.) Fold the non-adhesive side of the paper over the marijuana, tucking it under. Roll tightly towards the adhesive side.

7.) Twist one end to keep the weed and tobacco inside.

8.) Use a roach or crutch, if preferred, on the other side.

Knowing the names of different smoking methods doesn’t only ensure you’ll remain correct when in a group of friends. It also means you have some fun new ways to smoke your marijuana. So, grab your favorite strain and start trying them out. Use a strain with a high THC content and make it even better!  A spliff will take you back to the good old days so why not smoke one with a classic strain like Thai Stick.