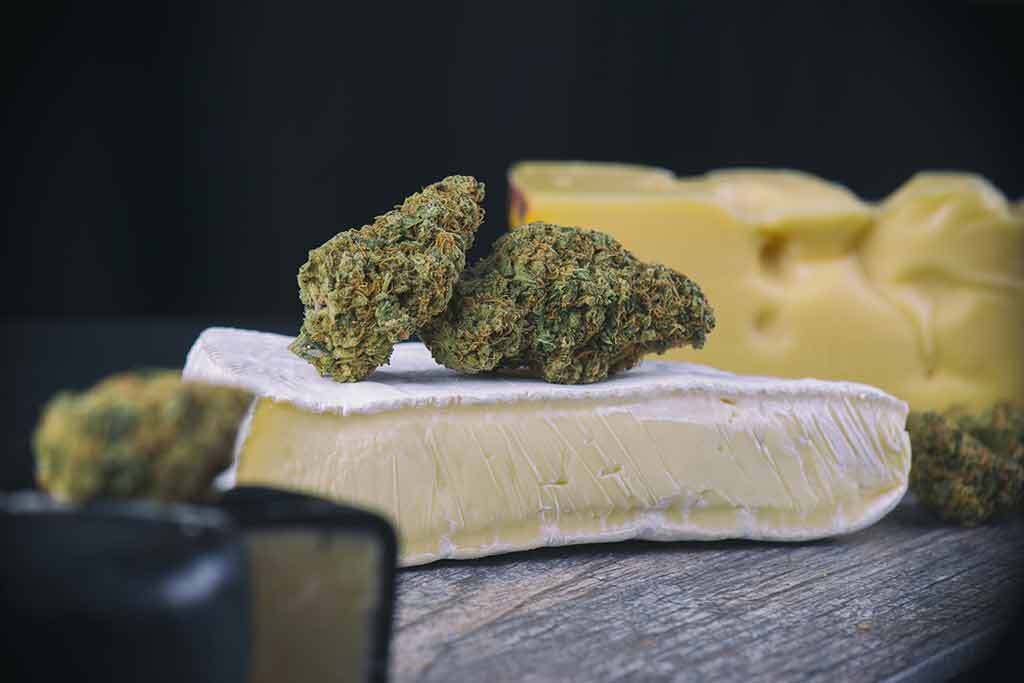 Cheese strains join the list of some of the most peculiar classifications of weed. Similar to gassy strains, or skunky strains, cheese weed strains are in a class all of their own. However, unlike only being notable for a unique aroma, cheese strains standalone as their very own genetic and come with quite the past. So, what makes UK cheese weed so iconic? Let’s get to know cheese strain weed better by exploring their history, facts, and today’s top varieties. Keep reading to learn more in our complete guide to cheese strains.

Cheese strains are up there with Haze and Kush strains as being some of the most infamous genetics, globally. But, what classifies a strain as a cheese variety? First and foremost, all cheese varieties available today trace back to an original ‘Cheese’ gene. So, they all share similar characteristics.

Cheese hybrids are synonymous with spicy and savory flavors that are reminiscent of actual cheese. The terpenes that produce these aromas vary from hybrid to hybrid, but the combination can be described as ‘rancid’ at times, and is typically pungent, strong, and powerful. Like actual cheese that sometimes smells funky but tastes delicious - UK cheese weed, is no different.

The unique flavor of weed cheese strains is gaining fans rapidly, as is its individual set of effects. Cheese strains have a notoriously high level of THC and tend to produce euphoric, uplifting, and comforting effects. These effects today, are beloved by medical consumers for treating symptoms of pain, depression, and anxiety. In addition, cheese strains can deliver a mad case of the munchies for stimulating the appetite, too.

Now, that you know a little more of what to expect from a cheese strain buzz - let’s explore the varieties’ history more in-depth.

Like so many landrace or OG strains, the cheese strains come with an elusive past. The strain first hit the scene in the early 1980s. While its exact history is still somewhat unknown, rumor has it that a west-coast Cali cultivator Sam, AKA “the Skunkman” moved to the Netherlands to perfect his art of growing. He brought along his legendary ‘Skunk #1’ strain which dutch cultivators soon grew fond of due to its quick flowering time. On the other hand, the strain was so pungent that they grew fearful that the skunky strain would draw unnecessary attention.

From there, the story goes that Skunk #1 seeds were transported to the UK. Upon cultivating the seeds, a southeast England cultivator and a group known as The Exodus Collective remarked the plants had a peculiar cheese odor. That cultivator continued cloning the plant due to its massively impressive yields. Hence, the popularity and geographical namesake of the UK cheese strain.

Over time, the UK cheese hybrid became one of the most popular in the region showing up in many alternative communities and festivals during the ’90s. But, the crossing didn’t stop there. The group again crossed the original plant with a male Afghani landrace to stabilize and perfect the strain. That’s when the first known UK Cheese seeds came to be. The strain didn’t take long to take off, winning the Best Indica prize at the 19th High Times Cannabis Cup in 2006.

What transpired between Skunk and Cheese between the Netherlands and UK is still unknown, but is to thank for the emergence of one of the UK’s most popular strains today. Since then, just like Skunkman and the Exodus Collective - cultivators are continuing to cross-breed and produce fresh hybrids of what we know and love as cheese strains. So, next, let’s discover the top 3 most popular cheese hybrids from the modern world of weed.

Want to add a little nostalgia to your current crops? Here are the top trending cheese weed strains you should try.

This strain says it all with its name, and produces big buds with beautiful purple hues and that well-known cheese aroma with a hint of berries. Big Blue Cheese is revered for its higher than average yields, favorable THC levels of 16-19%, and a well-balanced, soothing buzz.

The Cheese pays homage to the OG cheese strain and is a Cannabis Cup winner itself. The indica dominant variety can be grown indoors or outdoors, grows to manageable medium heights, and produces potent effects with pungent aromas. Even better, is the strain’s effects are fast-hitting and long-lasting.

Sweeten up your cheese weed menu, with the luscious Cheese Cake strain. This cheese hybrid adds a hint of sweet candy to its skunky, cheese aroma and is ideal for beginners with an easy-to-manage manner. The indica dominant variety delivers a quick head buzz, with potent levels of THC and is ideal for nightime use with sedating effects.

Due to the fact that cheese strains all share similar characteristics, any variety can benefit from a specific group of tips. So, if you’re considering growing a UK cheese hybrid keep the following growing traits and tips in mind for optimal success.

After learning more about the original UK cheese strain and its unprecedented past, it’s likely you’ll want to say cheese for your next plots. Not only are cheese weed strains resilient, fairly simple to manage, and quick to flower, but they produce wildly pungent and maximized yields. So, try your hand at cultivating a tried-and-true legend of a strain, and get your own weed cheese strain seeds today. Shop MSNL’s premium collection of top-sourced cheese genetics, now.