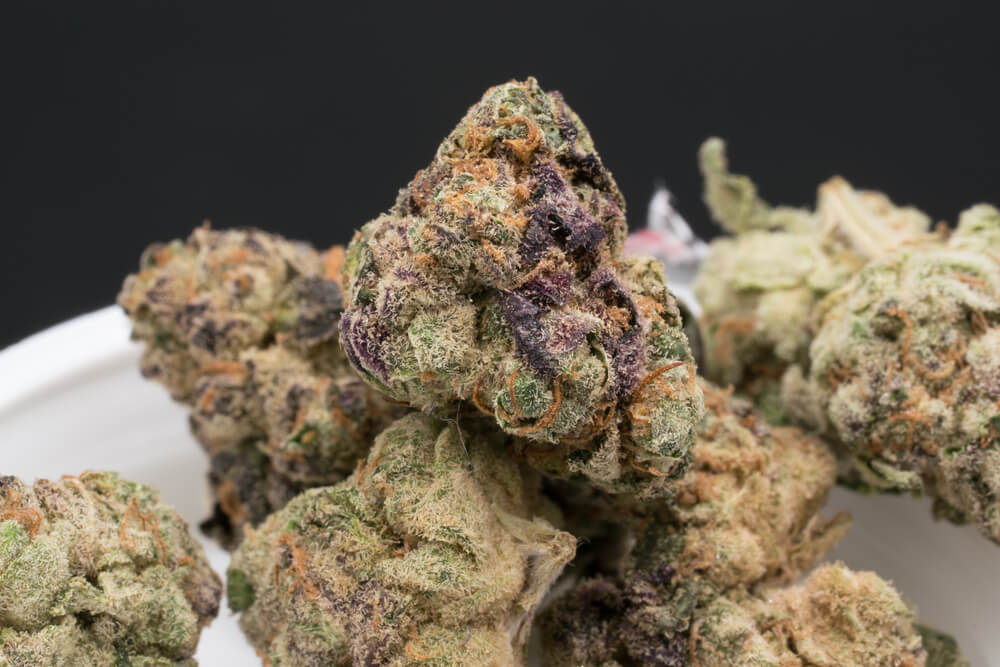 The Apple Fritters strain has been around the traps for a good while now (since 2016), which goes to prove that even in the fast-moving world of cannabis genetics, quality speaks the loudest. One of the most delicious strains to have ever graced the curing jar, bong glass, or rolling paper, Apple Fritters is still one of the highest-selling strains worldwide, and a strain that is hard to find in dispensaries outside of the east coast of the USA (if you are lucky enough to stumble across it at all).

But as we all know, a top-shelf nug of weed is more than just how it tastes.

So, what exactly makes the Apple Fritters weed strain so damn good?

Hang around, because that is the exact question we intend to answer right here, right now...

If you're a fan of a sweet breakfast, then you are in for an absolute treat with the Apple Fritters weed strain. The buds have a distinctively sweet and fruity flavor, with notes of caramel and apples (as the name would suggest). The sweetness is pretty subtle though and is definitely not overbearing, which can't always be said when discussing some of the newer genetics. This is probably due to the fact that it is balanced out by the more sour, citrusy tang. There is also a hint of diesel in there too, which comes through on the exhale.

As for the smell, it's pretty much what you would expect. Super sweet and super dank! The diesel notes are there again, but they are definitely not as pronounced as when smoking. When breaking open a jar of freshly cured Apple Fritters weed, you can definitely smell the apples, but that's mixed in with hints of other fruits (we are smelling a fair bit of pineapple and mango tones).

What are the effects of Apple Fritters?

The effects of Apple Fritters are pretty damn pleasant. It hits you pretty hard and pretty fast (within the first few minutes), with a nice, warming buzz that spreads throughout the entire body. This is perfect for those chilly winter nights when all you want to do is curl up on the couch and veg out in front of a comedy classic, and this is only enhanced by the almost overwhelming amount of giggles it can also provide. Sure, we smoked this with a couple of hilarious friends, but it really did make me wanna laugh, and laugh hard.

Is it a good strain for anxiety?

Yes, and no. It really depends on the circumstance I guess, and while I'm no huge sufferer right of anxiety (right now, anyway), I have had my struggles in the past.

I say yes because it doesn't provide a particularly cerebral headstone, which is one of the effects that can certainly trigger some anxious feelings for me. I also find the warming body buzz to be super relaxing, with quite a slow and easy transition into the effects. This is in contrast to some of the more cerebral and speedy strains, which can sometimes make my mind race uncontrollably. The 50/50 Indica/Sativa split makes this a strain that will work well for most people, but the pure strength of the strain means it should be smoked with a healthy amount of respect.

On the other hand, the uplifting nature of the high might not be ideal for those who are struggling with more serious anxiety issues and looking for a more sedative strain, as it could make you feel a little bit out of control.

All in all, I would say that the Apple Fritters weed strain is good for anxiety in small doses, and certainly wouldn't worsen the condition. But, as with everything, it's best to start slow and see how you react.

Does the Apple Fritter strain make you sleepy?

No, not particularly. I find that it actually has kind of the opposite effect on me and makes me feel more energetic, and definitely more socially alert. However, I can see how it could make some people feel a little bit drowsy. Again, it all comes down to individual tolerance and how your body reacts to THC.

In terms of couch-lock, I would say that it's certainly possible, especially if you smoke a lot of it. But it's not the kind of strain that I would automatically associate with being glued to the couch.

The first thing to know is that Apple Fritters is a feminized, photoperiod strain. This means that every seed will 100% provide you with delicious, dank flowers and that she can grow pretty big if cultivated outdoors. She works great for both indoor and outdoor setups, but she thrives in a warmer and slightly more humid climate than many strains - which makes the Apple Fritters Strain a winner for growers that live in warm, tropical, or even sub-tropical climates

The second thing to know is that this is a relatively easy-to-grow strain, but it can require a little more attention than some other strains. We found that she can be a bit more susceptible to powdery mildew, which is easy to treat but it is important to keep an eye out for early signs of this and nip it in the bud as soon as possible.

Another thing to note is that she is a pretty thirsty strain. I found that by the fourth week of full veg I had to up the number of nutes, and she stayed pretty hungry throughout the rest of the grow. I sometimes run a short flush in the last week before flower, but I didn't even consider it with Apple Fritters.

Of the 6 plants that I grew, I left 2 alone, I topped 2 once, and with the remaining two I topped them three times. I found that topping was the way to go, with the heavily topped plants producing bigger yields than the other two options. Scrogging worked really well with the 4 topped plants, and would definitely suggest it for this strain.

As for the actual process of growing, she is a bit of a slow starter but once she gets going she's a true green machine. I found that vegging for 6-8 weeks was about perfect, with the 8-week mark maybe pushing her a little bit too far. Flowering was bang on 9 weeks.

The final thing to know is that she produces some seriously stinky flowers! The smell is a complex mix of earthy, sweet, and sour notes, with a slight hint of gas that comes through as she gets closer to harvest. Not the best strain if you are trying to run a discreet grow in close quarters, but as long as you have a top-shelf carbon filter and a tent that can hold in all the beautiful aromas then you should be fine.

She also works great outdoors. She was ready to harvest by mid-October for me, and the whole growth went really smoothly (we were blessed with great growing weather for months).

Yes, this strain is a great option for novice growers, its reasonably easy to to grow. However, if you aren't used to smoking high THC weed then go easy on this because Apple Fritters is very potent.

Is Apple Fritter indica or sativa?

Apple Fritters is a balanced hybrid with a 50/50 split between Indica and Sativa. However it tends to grow short and bushy more like an indica than a sativa. This is what makes it a perfect candidate for using the LST training method to boost bud production.

What terpenes are in Apple Fritter?

Phellandrene is the main terpene present, with Limonene, Pinene, Myrcene, Ocimene, and Caryophyllene also found in decent amounts. Combined these terpenes are with give Apple Fritter is amazing sharp desert-like taste.