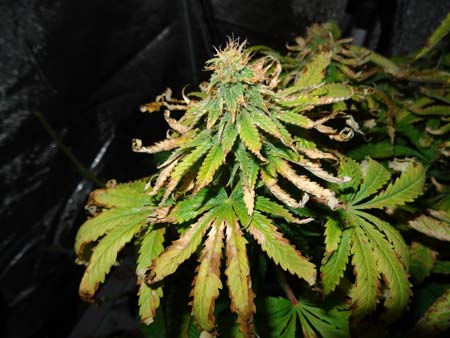 Successful cannabis growing requires keeping a constant watch on the health of your plants and the leaves and flowers generally offer a good indication of this. Is generally a pointer to over-watering and/or insufficient drainage.  You only want to water your plant when it is actually thirsty and the easiest way to check this is to stick a finger into the soil up to the first knuckle and see if the soil actually feels dry.  If it does, then how much water you want to give depends on whether you are growing in standard soil, using liquid nutrients, or super soil (or anything else of that nature).  In the former case, you want to use about a quarter litre of water to each litre pot volume and in the latter a fifth.  If you’re using normal soil, you want to see about a tenth to a fifth of your water as run off and if you don’t then that’s a pointer to drainage issues.  If you just have a mild case of wilting, easing off on the water should sort the problem, but if your plant has become waterlogged, it may need re-potting.

Crispy leaves are like dry skin, they’re generally a pointer to a lack of moisture, specifically underwatering.  If leaves get too dry they fall off, hence dropping leaves also point to underwatering.

Either or these symptoms is usually a sign of heat stress.  While marijuana plants typically like it on the warm side, even they have their limits.  When you’re managing an indoor grow, you always need to remember to account for the influence of external heat sources as well as the heat sources in your grow room.  For example, if it’s the height of summer outside, then this will raise the temperature in most indoor grow spaces so you may need to think about using fans to keep your plants cool as well as for ventilation.  If temperatures are too cold, this can also cause problems although this is a bit less common given the heat generated by the lights used for an indoor grow. This is probably one of the most feared cannabis grow problems there is, but fortunately it is also one of the easiest to prevent and/or resolve.  Mildew/mould is almost always the result of poor ventilation, leading to high humidity and/or poor airflow, so the way to avoid this grow problem in the first place, is to make sure you stay on top of your ventilation and part managing ventilation is ensuring that the plants are spaced far enough apart to avoid their leaves touching, which both improves airflow and makes it more difficult for grow problems developed on one plant to spread to another (and mildew/mould can spread very quickly if left unchecked).  If mildew/mould does develop then you must act quickly or you risk your entire harvest.  The fact that mould/mildew is such a common problem means that there’s plenty of suggested remedies out there, but we’ll just suggest one.

Clean your leaves, thoroughly but gently, using wet paper towels or a batch of wet cloths.  Using wet paper towels will pretty much force you to keep changing them and hence reduce the likelihood that you will actually spread the problem instead of eliminating it.  If you must use cloths, use a batch of them and keep changing them for clean ones, instead of just rinsing them.  Be very gentle, you need to avoid sending the spores into the air to land on other plants.

Once you have cleaned your plants, sort out your ventilation.  The reasons for approaching the problem in this order is that once the mildew has started you want to contain it before you start getting the air flowing effectively through the indoor grow room.

Treat plants with SM90, using one part SM90 to 5 parts water.  Alternatively, if you’re trying to grow organically, you could use milk (one part milk to nine parts water) or baking soda (two tablespoons per gallon of water).  In either case, wait until your lights are due to go out and spray your plants thoroughly, making sure to get all the leaves you cleaned. Leaf discolouration is a bit of a complicated one, since it can take many forms for many reasons.  For example, leaves can develop spots or change colour, becoming brown, purple, yellow or white depending on the source of the problem.  Probably the number one cause of leaf discolouration is pH fluctuations, with number two being nutrient burn.  In the first case the discolouration will probably be in the centre of the leaves, in the latter it will be at the tips.  After this, leaf discolouration may be caused by a deficiency in one or more nutrients or by pests.  There is so much variety in this issue, that the best general advice we can give is to take pictures of the problem and look online for help.

Common cannabis bud problems and what to do about them

Ensuring successful cannabis flowering is arguably the most important part of the grow since it’s cannabis flowering which brings the lovely buds we want.  With this in mind, here are some common problems and what to do about them.

Bud rot is essentially a form of mould, which means that prevention is pretty much as for the previous section on mildew/mould.  Unfortunately the only cure is to remove all affected buds, carefully, without spreading the problem and then sort out the ventilation. Assuming your plants are of an age to flower, the single biggest reason for them failing to do so is an inappropriate light cycle.  This is followed by temperature and then lack of nutrition.  Pruning (plant training) can also be a factor, if you’ve damaged your plants instead of making them stronger.

There are various reasons why this could happen, but the number one rectifiable reason is insufficient light and/or the wrong colour of light.  Basically plants need red light to trigger flowering, another colour of light may confuse them.  Light issues can be fixed, but be aware that slow flowering and/or small buds may be a reflection of issues in the vegetative stage, for example, if you’ve been over-enthusiastic with plant training, your plant may be trying to sort out the problem with its lost leaves rather than focusing on producing buds. Female cannabis plants can turn hermaphrodite under stress, in which case you will see hard bumps (pollen sacks) or “bananas” (stamen) in with the buds.  By this point there is nothing you can do to turn the plant back into a full female, but you either want to be scrupulous about removing all pollen sacks or isolate the plant completely from the pure females (preferably both).